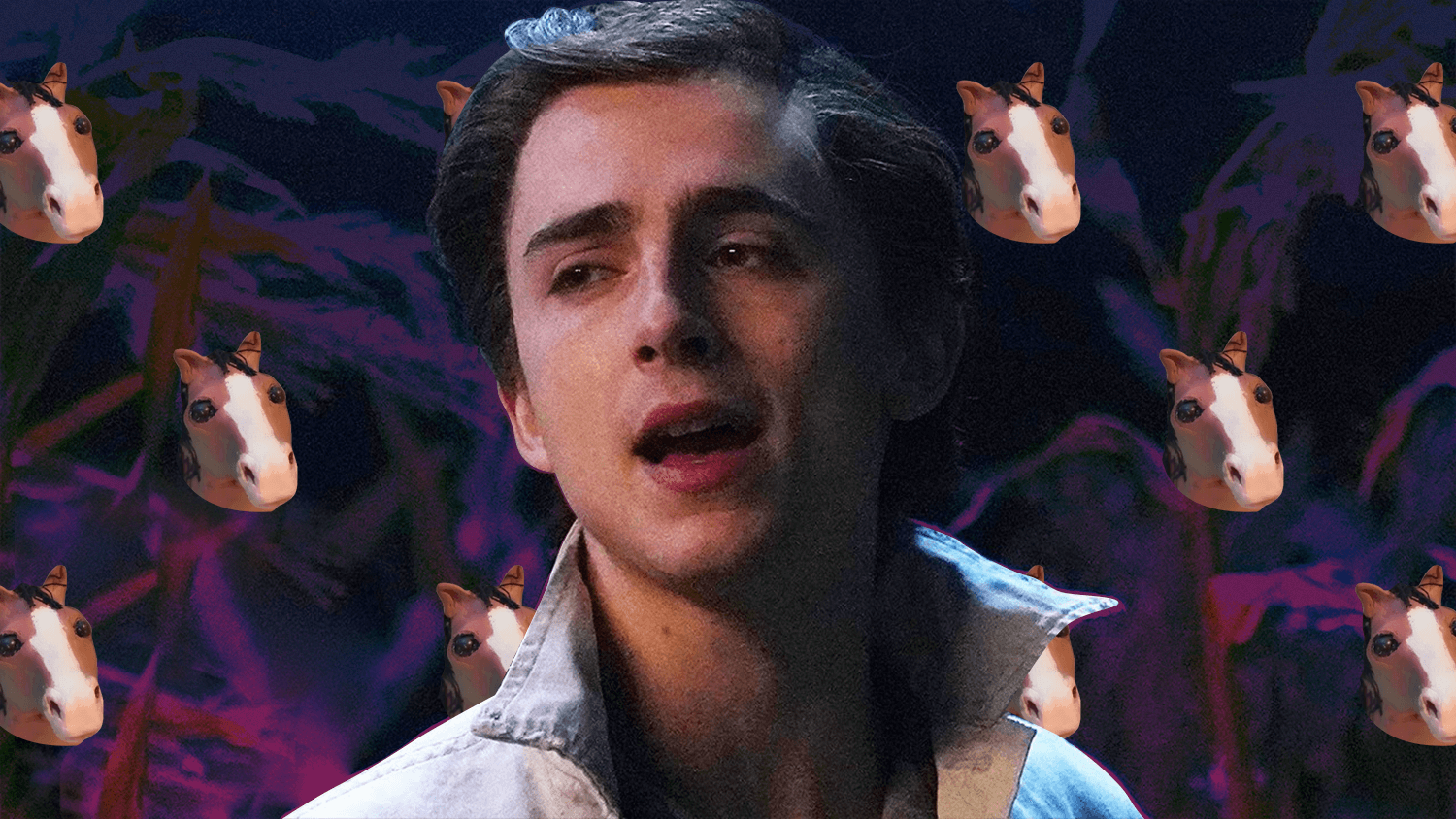 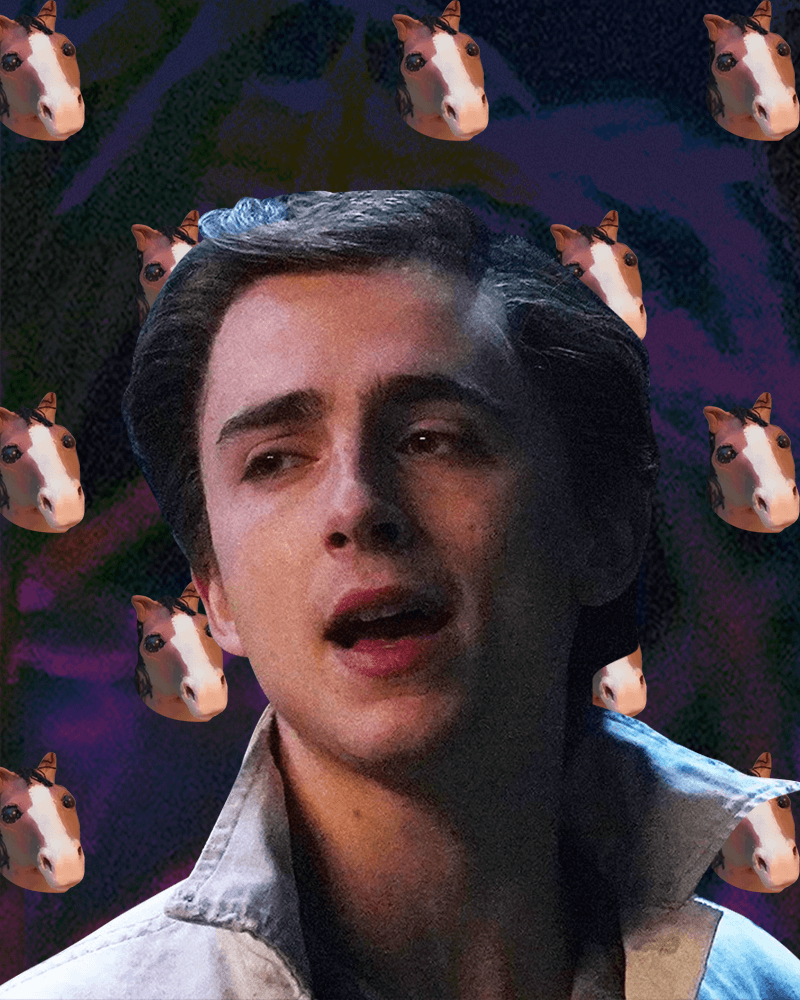 How a tiny horse walked into a family's life at the perfect time.

his is the story of a man and a tiny horse.

It is not the story of Timothée Chalamet, but he did play a part. The part of a farmer’s son named Ernest, who knows that when you love something, and you can’t afford to feed it, you set it free and do so by saying “go on, git,” over and over again, with more gusto than the big and small screen has ever seen.

Chalamet hosted Saturday Night Live last December, heading into the holidays-turned-insurrection vortex. While I used to catch the Cold Open live and Weekend Update with my coffee the next morning, my night owl ways have been in overdrive during the pandemic, and SNL is now early viewing for me.

At some point my husband, Mark, wandered in to say goodnight. As he turned to leave, a moonlit farm came onto the screen. And soon, Chalamet in plaid, tucked in behind a wide leather belt. Mark remained standing, as noncommitted viewers like to do. So it was that he took in a music video starring a tiny horse that would inexplicably shine unfiltered light upon the dim days we’d been living for the better part of a year.

Mildly bewildered, we enjoyed Tiny Horse live for the first time. We smiled, laughed, and wondered aloud why we were smiling and laughing. Was it the minimalist clay animation? The questionably rendered likeness used in equine closeups? Chalamet in Western garb (he also dons a cowboy hat)? The obscene span of time it takes Tiny Horse to traverse a hay-littered barn? Is it too soon to mention git again? I could go on.

And, who knew, Chalamet can sing! At least for Tiny Horse, he's perfect.
‍

When I came into the kitchen the next morning, I heard the tune and tenor of something familiar. Tiny Horse was now available online, and Mark had already watched it through again several times.

“This really is brilliant,” he said to no one while I was cleaning yesterday’s grinds out of the coffee maker. “Tiny Horse licks his palm.”

That was Sunday. By mid-week, Mark was pondering the rhyming scheme.

“‘He’s extra tiny today’ is just a filler line because it rhymes with ‘taking him away,’” he said more earnestly than when he told me Biden won Pennsylvania. “I mean, what does it mean to be tiny today?”

I didn’t tell him that spending most of my days inside our house during a raging global pandemic had made me feel very tiny.

On Friday, Mark, playing it yet again, announced, “It’s surprisingly singable!” and joined in for “There...he...is, my Tiny Horse!”

Then he dove into tropes. “Whoever wrote this song knows all the musical tropes: the bankrupt family farm, loneliness, saying goodbye....” I gazed at Mark gazing at Tiny Horse and thought I glimpsed the reflection of a four-legged miniature trot across the lenses of his glasses.

Years before I knew him, Mark was in the ensemble of several musicals in high school. The trope I live with is that you can take the boy out of the chorus but you can’t take the chorus out of the boy. Which means he still breaks into song with ease. Tiny Horse has now joined the ranks of “Sit Down You’re Rockin’ the Boat” and “Modern Major General.”

Midwinter, walking the dogs one night, Mark and I plodded along in silence, navigating icy shoveled sidewalks after a snow storm. Out of the darkness behind me came this: “I think only two things made me laugh this year. Trump losing and Tiny Horse.”

I’m convinced Tiny Horse’s sure footing in the zeitgeist of the uncanny was impeded only by insurrection, which came so soon after he was introduced to the world.

But in our household, Tiny Horse continued to ring out. And Mark continued his reviews, each time noticing something new he wanted to share. “Chalamet adds just the right touch of sincerity tinged with mockery.” (Yes, he’s talking about that impassioned heart thump.) Mark also checked to see if AOC had ever responded to the marriage announcement, and while Twitter had lit up to congratulate her, the bride offered no comment. Fallon wraps up their interview with the usual segue, “Tiny Horse, Everyone.” But this is not a goodbye, it's an introduction, because Tiny Horse is for everyone.

The greatest proclamation of all came from Mark in early spring.

“Tiny Horse is my new Dick in a Box.”

Justin, Andy, know that you held reign for 14 years. It pains me to say this, but go on, git.

Not long ago, Mark was sitting on the sofa with his laptop while I was on the floor communing with one of our dogs. Suddenly, I heard from on high, “It’s time.” I looked up to see Mark smiling.

Tiny Horse, once again, filled the space around us. Mark launched into his latest analysis, this time on the choice of camera angles and Tiny Horse’s sad blinking eyes. As the final notes faded, Mark sighed. “Tiny Horse is just sweet. I like that fact.”

In a year made up mostly of intricate levels of sour, I, too, like that fact. And that we have felt lighter because of it.

Ernest told Tiny Horse to go on, git, and do great things. We’re grateful he did.