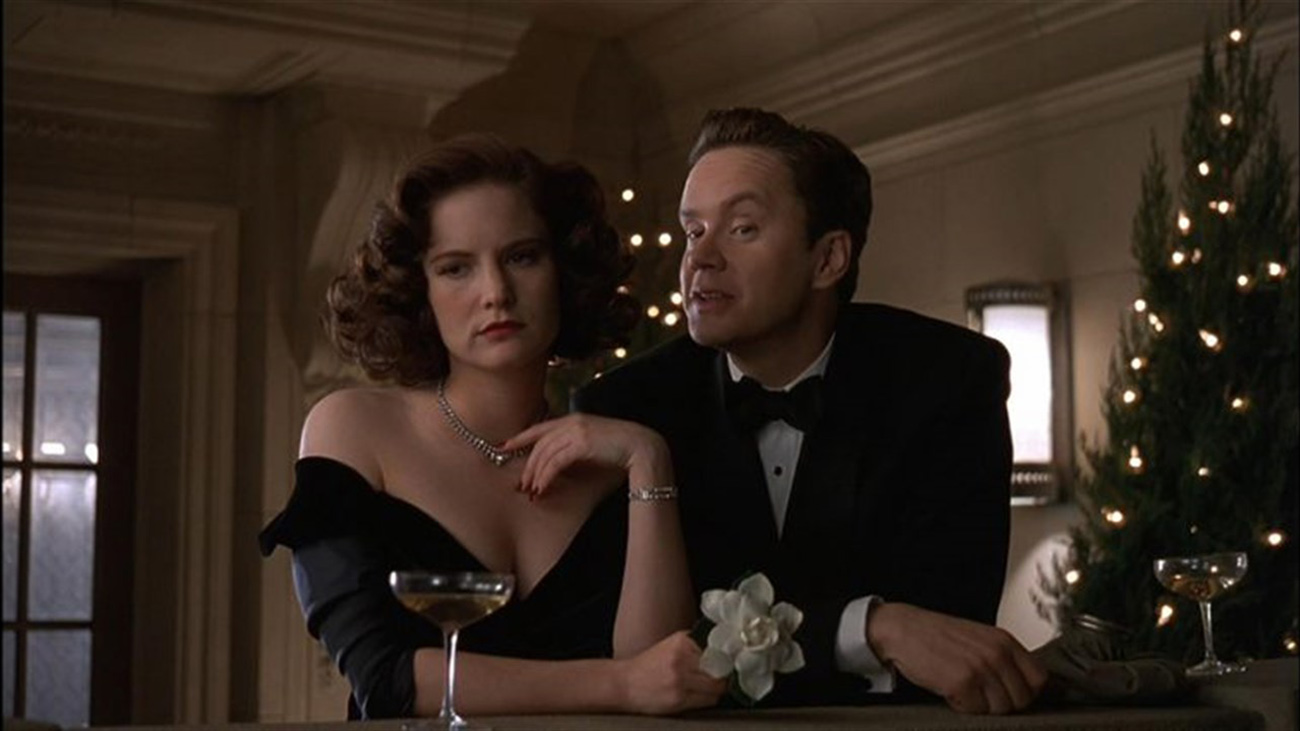 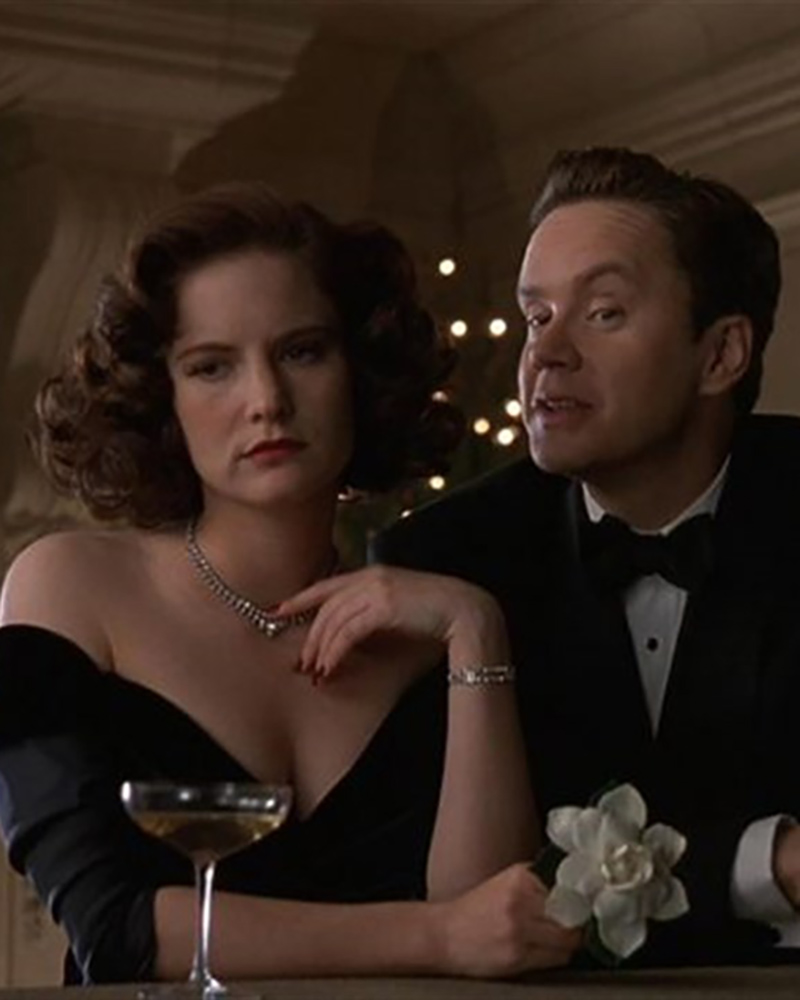 n the great tradition of the Coen Brothers pointing out society’s wicked stupidity, The Hudsucker Proxy (1994) packages its anti-capitalist satire into cartoonish pastiche, featuring a superb cast that plays living, breathing Looney Tunes characters. Initially dismissed as a stylish misfire, the Coens’ fifth feature holds up as a delightful testament to sumptuous filmmaking before the era of CGI dominance. The film’s message might be straightforward but, as the filmmakers argue, also perennial.

Fresh off a bus from Muncie, Indiana, the baby-faced, floppy-haired Norville Barnes (Tim Robbins) dopily gazes up at the industrial splendor of 1958 New York City. Just out of business school, the only gig he can get is in the hellscape mailroom of Hudsucker Industries, whose motto—“The future is now”—is emblazoned beneath a giant clock, maintained by Moses (Bill Cobbs), at the top of its skyscraper. Like in many Coen films, Moses represents an omniscient figure, who, in this case, controls time. “Time is money,” he says. “It drives that old global economy and keeps Big Daddy Earth spinning.”

After his military-esque orientation, Norville is thrown into the belly of the Hudsucker corporate machine, fumbling through his duties all while promoting an idea he believes will propel him to success: a folded napkin with a circle drawn on it. He proudly displays it to anyone in his orbit, following up with Hudsucker’s de facto catchphrase: “You know, for kids.”

Meanwhile, during a Hudsucker board meeting, the company’s founder Waring Hudsucker (Charles Durning) abruptly jumps out of the window, after which the ruthless Sidney J. Mussburger (Paul Newman) picks up Hudsucker’s still lit cigar and immediately addresses the financial ramifications of his suicide. Since the bylaws state that Hudsucker’s shares will be released for sale to the public, Mussburger and the board hatch a scheme to tank the stock price by installing an incompetent president in order to buy up a controlling interest in the company. After Norville pitches his seemingly idiotic napkin idea to Mussburger instead of delivering him an important letter, the small-town boy is quickly named the new president of Hudsucker Industries.

His appointment arouses the suspicions of star reporter Amy Archer (Jennifer Jason Leigh), who promises her circulation-obsessed editor (John Mahoney) that her investigation into Norville will be her next big story. Similar to her vocal performance in Mrs. Parker and the Vicious Circle (1994) from the same year, Leigh expertly channels fast-talking dames of Studio-era Hollywood like Katherine Hepburn and Rosalind Russell. The Coens and Sam Raimi-penned script push her rapid-fire dialogue to near-absurd limits, rendering her a lovable caricature that reflects the Coens’ playful misanthropy.

The city’s denizens all come across as animated buffoons—either sinful and self-interested, or naïve fools. There’s the Woody Woodpecker-like elevator operator Buzz (Jim True), who, per his words, “has the fuzz and makes the elevator do what she does." In a memorable scene, Norville and Archer’s first meeting at a lunch counter is narrated by two cabbies who speak like cigar-chomping screenwriters. Multiple iterations of high society archetypes attend a fancy-dress ball and woo over a resplendent Peter Gallagher as a celebrity crooner. Each performance meets the heightened tone and timbre of the film.

The ridiculous characters live in a ridiculous world with ridiculous circumstances. The circle drawn on a napkin turns out to be the idea for the hula-hoop, maybe one of the simplest products ever produced. Norville touts the gizmo’s features: economy, simplicity, low production cost, and some sand inside to “make the experience more pleasant.” A fast-paced montage presents the enormous effort and laughable amounts of bureaucracy a company puts into producing what amounts to a dumb widget. But the hula-hoop inexplicably takes off—a cutting comment on the inscrutable nature of trends. Kids everywhere are swinging their hips using Norville’s invention which eventually becomes a craze among adults as well.

The whirlwind success makes Norville a headline-making celebrity branded as a Steve Jobs-style idea man. He transforms into a vain, self-aggrandizing business tycoon rumored to be dating the fabulous Za Za (Anna Nicole Smith). But expectations mount for Norville’s next big success. He proudly announces his “new” ideas, which amount to nothing but variations on the original hula-hoop, a damning critique of industry’s narrow imagination.

Eventually the pressure forces Norville to break down, which causes Mussburger to leave him in the gutter. Norville’s swift downfall, which renders him the ire of an angry mob, speaks volumes about the Coens’ opinions on the capriciousness of celebrity and the fickle nature of public opinion. Their perspective would be validated by Hudsucker’s mixed critical reception and poor box office gross. Roger Ebert believed the film was “all surface and no substance.”

Yet, the Coens’ corporate and consumerist critique nevertheless rings true. Guileless imbeciles with inflated egos constantly run scams on the unsuspecting public; they’re discarded like yesterday’s trash the moment their use runs out. The public continues to irrationally eat up mind-numbing childish ephemeral to this day: hula hoops, Beanie Babies, Baby Yoda. America has disposable income—what else are they gonna spend it on?

As posited by an angelic Waring Hudsucker, greed is an engulfing disease. “I have let my success become my identity. I have foolishly played the great man and watched my life become more and more empty as a result,” reads his suicide note. Humanity remains the opposing force to capitalism’s inhumane structure.

By the film’s end, Norville continues the never ending cycle of corporate life. (His next hit idea: another circle. This time it’s a Frisbee.) Yet, he follows the concluding advice in Hudsucker’s note: “Failure should never lead to despair. Despair looks only to the past. The future is now.” This humane punctuation even extends to the filmmakers themselves, who followed the film with Fargo, a critical and commercial hit that netted two Oscars. Even Hudsucker eventually became a cult film embraced by the next generation. Turns out it was, you know, for kids.

The Hudsucker Proxy is available to rent or purchase on Amazon Prime, YouTube, Apple TV, Google Play, Vudu, and Redbox.

Kent M. Wilhelm is a multimedia film journalist who also covers Formula 1 from time to time. He's happy to discuss James Bond with you, regardless of your level of interest. His insignificant brilliance can be found on Twitter at @kw_hc.