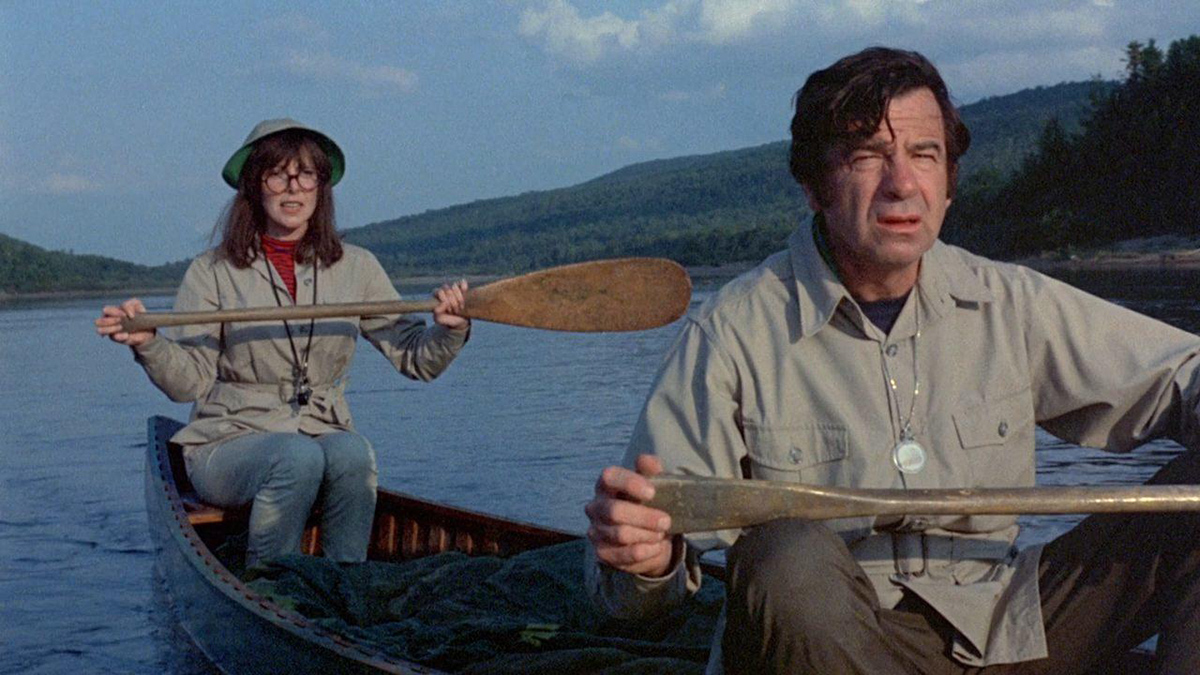 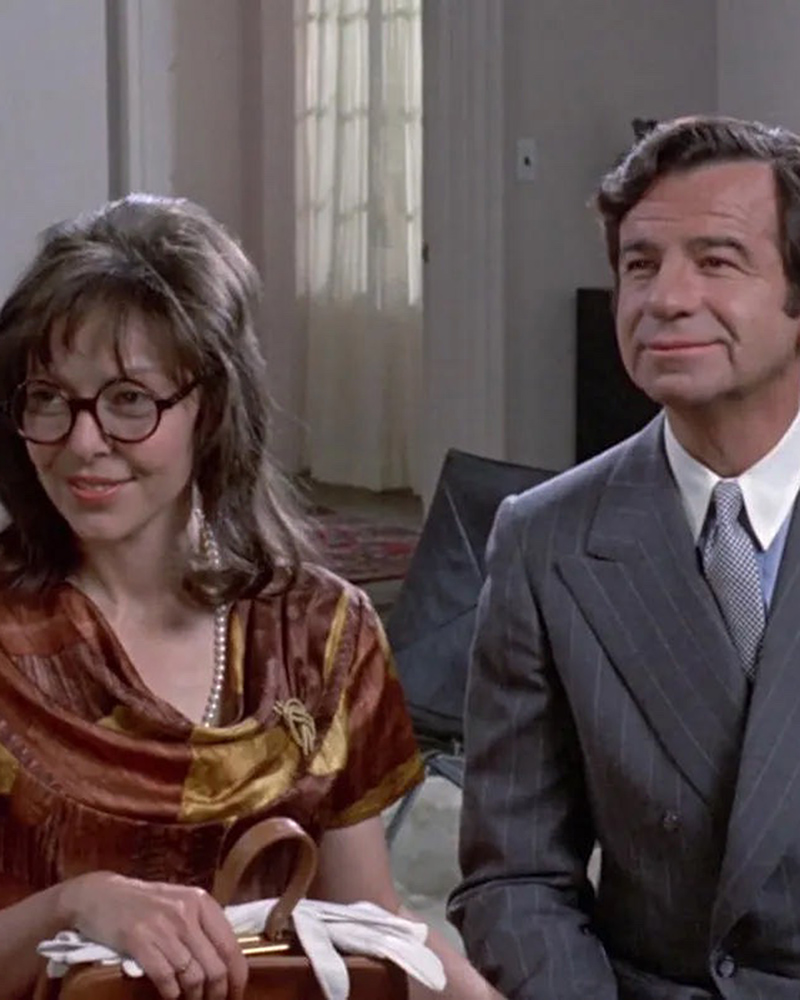 May's sharp satire of the wealthy refuses to pull any punches while also chronicling a sincere personal transformation.

If you do not commit suicide, sir, then you will be poor.”

“Poor in the only real sense of the word, sir, in that you will not be rich.”‍

In Elaine May’sA New Leaf (1971), the valet Harold (George Rose), dresses down his master, Henry Graham (Walter Matthau), both literally and existentially, as he explains to him the concept of having no money while efficiently transforming his attire from day to night. “There is no such thing as gentile poverty,” Harold patiently explains. As he has a vested interest in the maintenance of their status, Harold suggests that Henry find a rich woman to marry now that his inherited fortune has dwindled to nothing.

May’s first film as writer/director is a carnival of absurdity played straight, earning its patina of punchlines through the shrewdly observed psychological arcs afforded to its principle characters. Urbane, debonair Henry has never had to make any concession to normal human niceties. Whereas regular folks are familiar with the thought of potential poverty, the idea is shockingly foreign to Henry. May writes the kind of jokes that deepen our understanding of character, and here, she draws out the hysterical absurdity of Henry trying and failing to grasp the notion of penury, while underlining that we are traveling with a spiky anti-hero.

It falls to Henry’s long-suffering lawyer, Mr. Beckett (William Redfield), to break the news that he has spent his entire inheritance. Henry insists that Beckett pay a bounced check, indignantly waving aside the stark news that he has no capital and no income to speak of. “Come to the point,” he insists, after Mr Beckett has already labored it. May basks both in the humor of Henry’s delusional confidence and the desperation of an everyman forced to leaf through the English language in search of a clarification of clarity: “The point, Mr Graham, is that you don’t have any money. The capital and income are exhausted, and you no longer have any money. I wish there was some other way I could say it… You have no capital, no income. You have no money."

The penny (or lack thereof) finally drops, leading to a montage of Henry going to his regular luxury haunts whispering, “I’m poor.” Mike Nichols once said to Walter Matthau, “You’re a good actor but a bad man.” Irrespective of this observation’s accuracy, these negative qualities are the ideal credentials for Henry, someone harshly indifferent to the fate of his fellow men, yet who bites his fist in distress as he contemplates selling his Ferrari and no longer dining at Lutece.

A profound misanthrope, Henry can only imagine marrying for money with the caveat that he will murder his soon-to-be wife. Hence, the mark must be a wealthy and isolated heiress. Enter May as Henrietta Lowell, a soft-spoken and bespectacled botanist prone to walking around with clothing tags still attached and dusting herself in crumbs every time that she eats. (“She needs to be vacuumed,” laments Henry.)

In this odd couple, May plays the straight man, letting Matthau go to town with his expressive hangdog face and gleeful Machiavellian plotting. Their meet cute revolves around Henrietta, a strong contender for the clumsiest woman in the world, dropping two full teacups on the carpet at a luncheon. Having just learned about her fortune, Henry comes to her rescue, spiriting her away from the fuming hostess with an incredible speech that impugns the hostess’s alleged carpet fetish.

Though it’s consistently and inventively funny, the beauty and the glory of A New Leaf is that it stands as a relationship drama about the kind of personal transformation that sneaks up on someone while they're busy doing other things. Yes, Henry is preoccupied by fantasies of murder (the extent of these were cut by Robert Evans, the head of production for Paramount Pictures, who took the film away from May), but he is also so aghast by the way that Henrietta lives that he—a lifelong man of leisure—dedicates himself to organising her household, taxes, and even her person, snipping off clothing tags and washing her sticky hands as a matter of course.

May essays a childlike helplessness spiked by her passion for botany and hopes of discovering a new type of fern. The comic chemistry between her and the irascible Matthau finds its pinnacle in a honeymoon scene in which Henrietta has put her nightgown on incorrectly. (Head through the armhole, we’ve all been there). May stitched herself into the nightgown without telling Matthau, and his attempts to redress her runs for over a minute as she stands there, stock still, while he narrates the situation in the heavily controlled tone of a man who cannot believe it has come to this.

Speaking of Matthau’s voice, his naturalistic, condescending delivery stands out as one of the film’s highlights. His various flourishes land excellently, like when he adopts a tremulous bass to shout at Henrietta’s lawyer, “How dare you call my fiancé a nincompoop?!”, or when he’s genuinely distressed during his proposal to Henrietta, which he delivers while kneeling on the broken glass that Henrietta ineptly dropped. Later, he tells Harold, in a perfectly acerbic tone, “I’m lacerated but saved.”

The screenplay never loses sight of its target: the absurd mentality afforded to the wealthy. It turns out that Henrietta’s entire staff, right down to her lawyer, are on the take. While this means that Henry fits right in, he can’t relate to the lower orders. May’s gorgeously neat plot culminates with Henry creating systems to protect her from people exactly like him, such as firing her freeloading staff and instating new supplicant employees. “There are all these people in the house,” says Henrietta, peering through her thick lenses. “They’re not people, Henrietta, they’re servants,” says Henry, in another flawless comic moment that cuts to the core of the logic being satirized.

Harold accompanies Henry from his old bachelor life to his new married one, serving as an oracle who underlines the film’s signature themes in his dry English accent, in turn helping Henry to see his nose in front of him. Harold’s survival depends upon Henry’s, as he points out in the dressing down scene, “How many men these days require the services of a gentleman’s gentleman? How many men have your devotion to form, sir?” It is this very devotion to form that makes A New Leaf such a delicacy. May profoundly understands the Henry Graham’s of this world and thus can appropriately skewer them with her considerable, merciless wit.

Over 50 years later, it’s amazing that May’s film has barely dated. Writing from the UK, where a millionaire has just been appointed Prime Minister—not elected, but selected by a Conservative party that has dehumanized the poor over 12 years in power—it feels resonant to watch a genuine anti-hero, one with no interest in being redeemed politically, even if he can personally turn over a new leaf.

A New Leaf is available to stream for free on Pluto TV. It is also available to rent or purchase on Amazon Prime, YouTube, Google Play, Vudu, and Apple TV.

Sophie Monks Kaufman is some kind of a woman. What does it matter what you say about people?