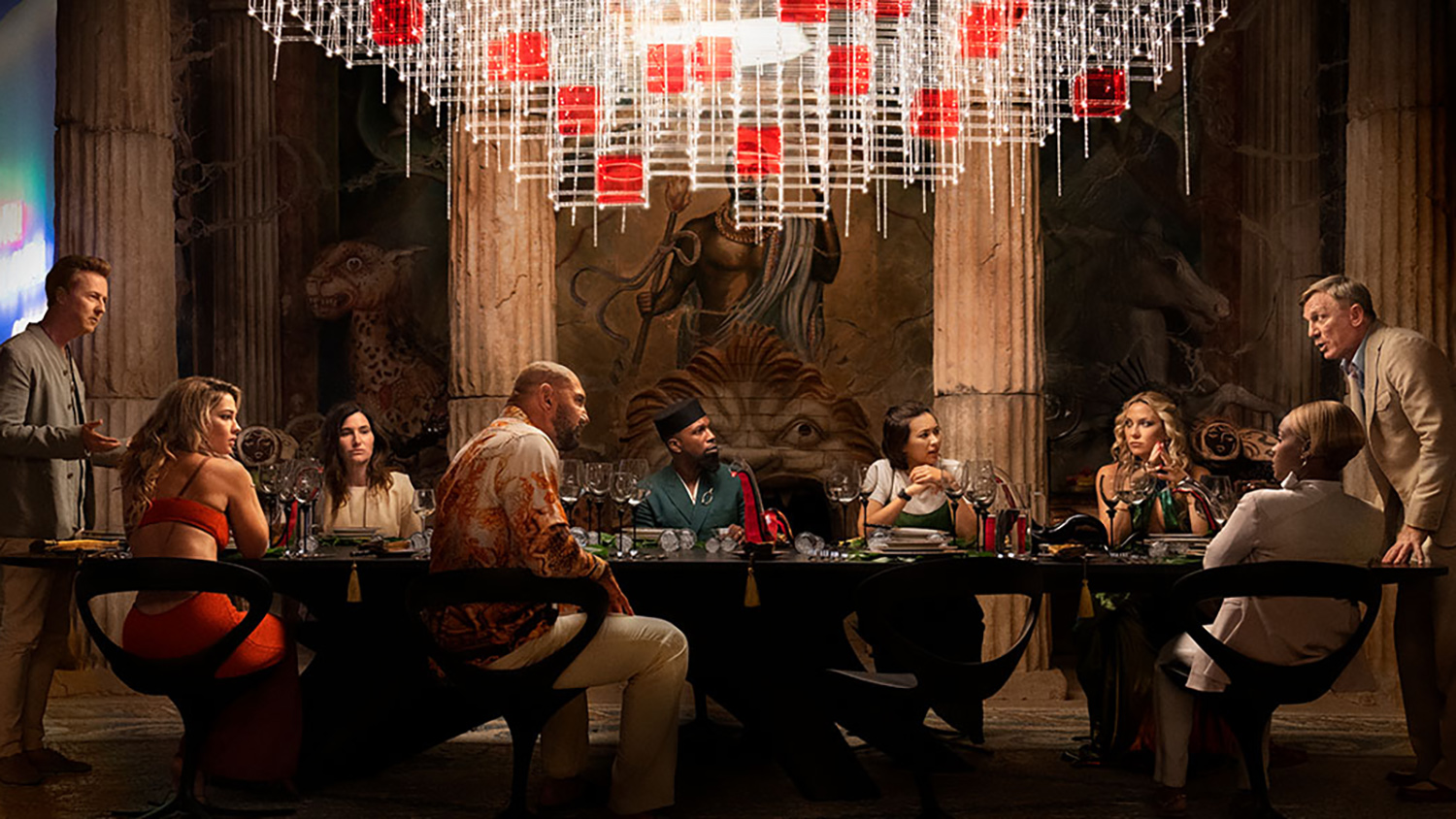 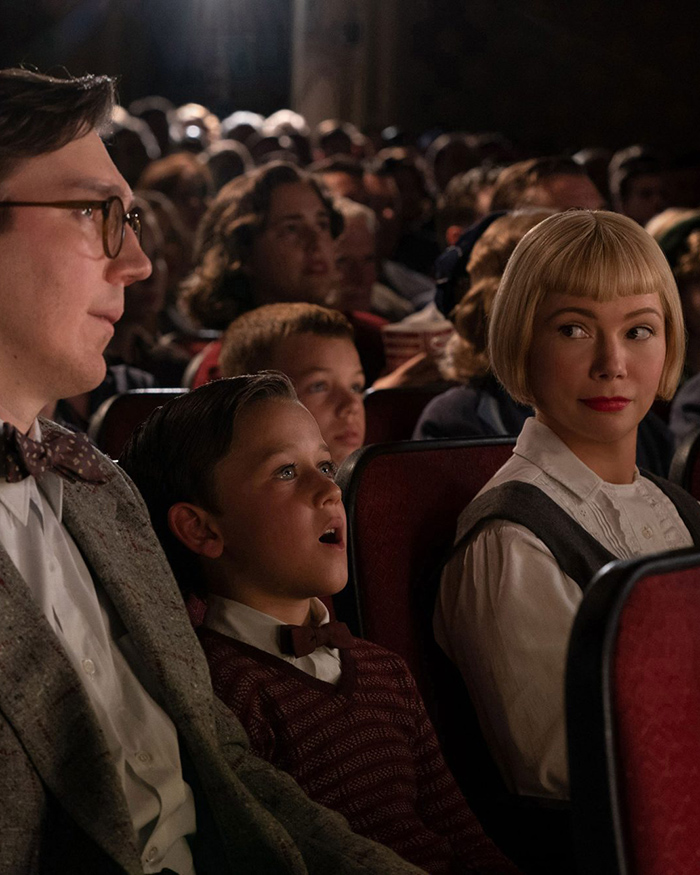 Early in The Fabelmans, Steven Spielberg’s teenaged stand-in Sammy (Gabriel LaBelle) looks over footage from a homemade Western he filmed with his friends on an 8mm camera. He reviews the climactic gunfight scene and concludes that it looks fake, but he can’t quite see how to rectify it. Later, when his pianist mother Mitzi (Michelle Williams) accidentally steps on a piece of sheet music with her heels after playfully roughhousing with her husband Burt (Paul Dano) and family friend Bennie (Seth Rogen), Sammy has a jolt of inspiration: poke holes in the film to simulate the flash of gunshots. Later, when he screens the film for an audience, one of his friends, genuinely taken aback, says out loud to no one in particular, “How did you do that?”

If there’s a question worth asking the 20th century’s most popular and populist American filmmaker, it’s probably, “How did you do that?” even if the answer is as simple as pinpricks in a piece of film. Spielberg’s preternatural sense of filmmaking craft has been apparent since his first directing job—a segment in the pilot episode of Night Gallery (1969), written by Rod Serling and starring Joan Crawford, at the age of 23—but it’s become a bulwark against decades of sometimes valid, but often unfairly dismissive criticism. Spielberg is an institution unto itself, someone responsible for creating the pop cultural conception of “universality” in his own image. It’s patently ridiculous to be defensive of his position in an industry that would look radically different without his contributions.

Still, it’s too easy to disregard his technical abilities—his innate sense of ensemble blocking, the reflexive understanding of camera placement and movement, the foundational tactics of sequence building; all techniques that have become overlooked or passé in recent years. It’s too tempting to linger on his sentimental streak and his childlike sense of wonder but ignore his awareness of those mechanisms as an avenue to explore the transparent heartbreak and resigned brokenness at the core of his filmography, much of which stems from childhood trauma. These are admittedly old, tired arguments and I’m not breaking new ground by waging them here. Nevertheless, they’re legitimate.

Spielberg’s parents, Leah and Arnold, both had to die before their son could make his coming-of-age memoir The Fabelmans. It’s his first credited screenplay since A.I. Artificial Intelligence (2001) and only the third in his career after Close Encounters of the Third Kind (1977). All three films are vulnerable works chronicling families breaking apart and personal worlds torn asunder. The Fabelmans filters this fracture through Sammy’s eyes as he slowly discovers that his eccentric family has major cracks in their foundation. Amidst discovering his facility for moviemaking, he comes to the painful realization that his mother loves someone other than their father through a home video he directed. Sammy’s growing awareness of his parent’s emotional fault lines and personal flaws eventually manifests in his myopic commitment to filmmaking.‍

The Fabelmans’ screenplay, co-credited to Tony Kushner, goes to great lengths to underline certain capital-T Themes: the divide between creativity and science, epitomized by his mother and father’s respective personalities; the power of images to shield and reveal painful truths; and art as a means of control in an otherwise disordered world. Like many Spielberg films, sometimes these ideas are communicated in a heavy-handed manner, as if there’s a palpable fear that someone might not understand the obvious, but there’s a unified purpose both in the writing and the filmmaking that accrues emotional weight even in familiar territory. I’m not sure it’s necessary for The Fabelmans to feature a scene where Mitzi and Burt break the news of their separation to Sammy and his three sisters, the site of Spielberg’s core trauma explored time and time again his work, yet the 75-year-old director finds a way to make such a moment feel uncomfortably tragic all the same.

Part of The Fabelmans’ power comes from its sprawl: it chronicles roughly a decade in the family’s life, primarily defined by crucial moves across state lines and the various films Sammy directs and exhibits to his friends and family. The sheer time spent in the company of the family deepens what would otherwise be trite revelations or stale arguments. Spielberg filters a profound specificity into his conception of the eponymous family, pulling rigorously from his own life. Like in the film, his mother was a trained concert pianist and his father an electrical engineer crucially involved in computers. Like Sammy, Spielberg also made his first home movie featuring a toy train wreck, as well as a Western with his Boy Scout troupe and later a war film entitled Escape to Nowhere with his classmates, which won a prize in a statewide competition. Spielberg’s sisters were frequent presences in his films as a child; Steven would find clever ways to scare them to elicit real screams for horror scenes. He was the subject of anti-Semitic bullying, the depiction of which in The Fabelmans feels personal and violent. His mother eventually left his father for a family friend. He lived with his father when he briefly attended college in Los Angeles before dropping out to pursue filmmaking full time.

The finale of Close Encounters of the Third Kind finds government specialists communicating with extraterrestrials using light and sound; James Lipton of Inside the Actors Studio teased out the obvious personal connection in this scene: Spielberg was reuniting his mother and father through the former’s love of music and the latter’s skill in engineering. In The Fabelmans, Sammy forgives and comes to terms with his parents, but not before he merges his father’s technical prowess and his mother’s emotional vulnerability into a personality so powerful that it cows high school bullies and impresses a Jesus-obsessed girl. The film culminates with a dramatization of Spielberg’s meeting with John Ford, who’s played by director David Lynch, the specific details of which are readily available online. Suffice it to say, it’s terribly moving to watch Spielberg’s peer, one who forged ahead in a radically different artistic direction, assume the role of the old guard to “advise” a young upstart filmmaker who’s a double for the director of Jaws and E.T. Spielberg’s personal past and present are forever intertwined with American cinema’s. The Fabelmans place them in active conversation in the hope that they’ll come to an understanding.‍

The Fabelmans will be released in select theaters on November 11 and in a nationwide release on November 23.‍

Three years ago, Rian Johnson’s Knives Out (2019), his one-for-me whodunit following his brief foray into the Star Wars universe, premiered at the Toronto International Film Festival to rapturous acclaim. Roughly 18 months after netting over $300 million worldwide, Netflix bought the rights to two Knives Out sequels for a whopping $468 million. The Netflix deal not only gave Johnson near-complete creative control, but he, his longtime producer Ram Bergman, and the film’s star Daniel Craig stand to walk away with upwards of $100 million each. A losing bidder for the sequel rights told a Variety reporter, “The math doesn’t work. There’s no way to explain it. The world has gone mad. It’s a mind-boggling deal.”

The initial fruits of that “mind-boggling deal,” the first Knives Out sequel, Glass Onion, premiered in Toronto this past weekend to lesser, but still general acclaim. While Knives Out used the backdrop of Trumpian discourses around limousine liberal hypocrisy, bootstrapping rhetoric, and ever-increasing xenophobia to set its murder mystery, Glass Onion uses the language and iconography of the pandemic and tech disruption as its contemporary backdrop. In this installment, our Hercule Poirot-esque hero Benoit Blanc (Craig) is invited to a private Greek island owned by billionaire Miles Bron (Edward Norton) for a murder mystery party with his old obnoxious “disruptor” friends, all of whom work in rarefied fields of politics, high fashion, science, YouTube influencing, etc. Obviously, someone actually turns up dead and it’s up to Blanc to solve the case.

An ominous voice at the end of my press screening informed the audience to avoid spoilers in our reviews or social media posts, though it’s unclear if that warning solely refers to the nature of the film’s twists or if it also includes the various cameos, jokes, themes, or really anything else that could potentially fall under such a vague banner. In an effort to be as circumspect as possible, I’ll just say that Glass Onion features a similar narrative structure to Knives Out, including a comparable lengthy flashback that resets audience expectations, the emergence of a mysterious outsider character, as well as a strong emphasis on motive over the killer’s identity, which becomes fairly clear earlier than the genre usually intends. Also, much like the first film, Johnson includes an explicit political critique, this time of self-styled truth-tellers and “socially conscious” billionaires whose effort to improve the world belie simple avarice and sheer stupidity.

Johnson’s choice to reference and engage with contemporary cultural/political discourses, all of which are heavily debated on social media platforms, continues to be divisive for understandable reasons. I found Glass Onion’s political comedy to be more amusing than outright funny, though Johnson certainly includes some good jokes in the mix. Anyone who has pissed away enough time on Twitter will clock the digs at Elon Musk-styled tycoons, MRA types, and oblivious celebrities with access to a global microphone. But the political framework rarely reads to me as outright pandering, and I simply don’t scoff at the idea of a writer-director with bountiful resources tackling the “here and now” just because terminally online types (including myself) have seen snarkier jokes about tech douchebags or cancel culture. Johnson works in mass entertainment after all, and this fairly fleet, occasionally clumsy, transparently lavish Agatha Christie-indebted mystery film mostly entertains even if it trips over a pop culture reference or two. There are far worse artistic crimes than Johnson cashing Netflix’s Monopoly money to pay for expensive needle drops and opulent locations so he can gently bite the disruptive hand that feeds him. ‍

Glass Onion will be released in select cinemas in November and on Netflix on December 23.