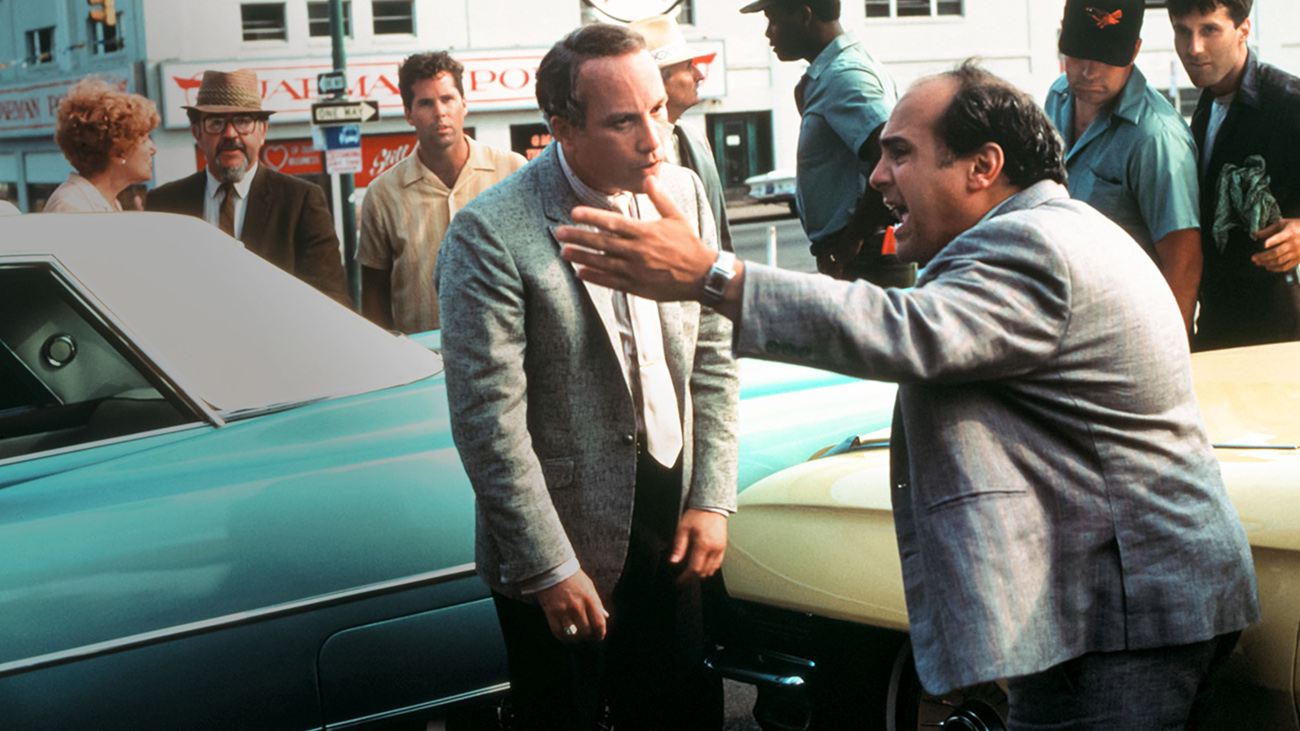 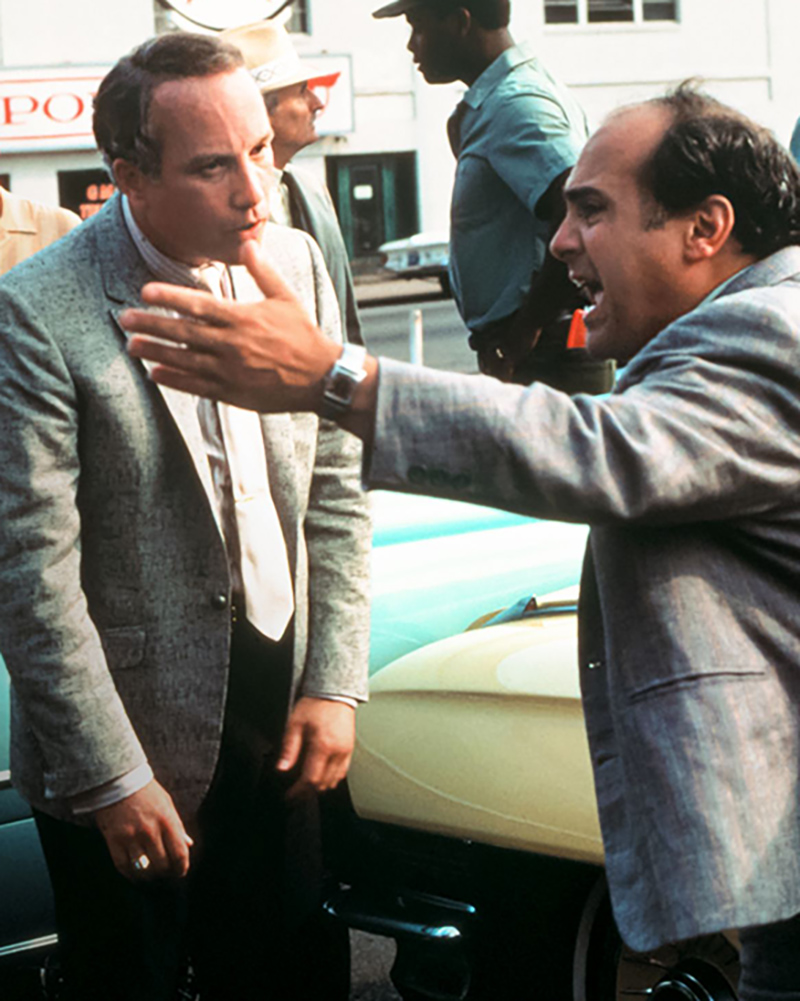 bout halfway through writer-director Barry Levinson’s 1987 comedy Tin Men, a down-on-his-luck Baltimore aluminum siding salesman named Ernest Tilley—played by Danny DeVito at his grouchy, sad-sack best—gets a letter from the IRS saying he owes back-taxes totaling around $4000. (And that’s in 1963 money.) Tilley admits he “probably forgot” to file returns for the past several years, but he’s still indignant that the federal government wants to hold him accountable. “It’s not like they need my money to build a bomber,” he says. “You think they’re waiting for my money to build a new road?”

By the end of the movie, the IRS has seized all of Tilley’s assets, including his Cadillac, his house and his furniture—some of which belonged to his soon-to-be ex-wife, Nora (Barbara Hershey). An irritated Nora laughs in his face. “You think you’re some special case? You gotta pay your taxes, just like everyone else has to pay their taxes.”

So it goes throughout Tin Men, a low-key comedy about high-strung guys, and one of the most stubbornly relevant movies ever made by Levinson, a filmmaker who specializes in movies about men who come across as smooth, savvy and broken.‍

Tin Men is the second of Levinson’s four “Baltimore films,” the other three of which are more directly autobiographical. After spending much of the 1970s collaborating on screenplays for other people’s movie projects and writing sketches for The Carol Burnett Show, Levinson scored a critical hit with his 1982 directorial debut Diner, which has a cast of future stars (including Mickey Rourke, Kevin Bacon, Daniel Stern, Paul Reiser, Steve Guttenberg and Tim Daly) playing a bunch of immature young men in 1959, still chasing women and spending all night bullshitting in a restaurant booth, just like they did when they were teenagers. He followed that with 1990’s Avalon, about an immigrant family drifting apart as the 1940s give way to the 1950s; and then 1999’s Liberty Heights, about a mid-1950s family losing touch with their Jewish identity.

If you were to put these into chronological order by era, Tin Men comes last—just a few years after Diner. Levinson himself was barely in his 20s in 1963, so unlike the guys in Diner, the characters in Tin Men don’t resemble his buddies. These are more like the Diner guys’ uncles and bosses: slick-talking middle-aged schmoes who go through life convinced they’re the protagonist of every scene, and that their minor hassles are major injustices.

As opposed to the anecdotal, digressive Diner, Tin Men has a plot and notably a twist. Richard Dreyfuss plays Bill “B.B.” Babowsky, a more successful siding salesman who smacks into Tilley’s car while backing out of a Cadillac dealership in the movie’s opening scene. Throughout the rest of the film, in between hustling aluminum and jawing with their friends about life, ladies and pop culture—the Levinson staples—B.B. and Tilley carry on an escalating campaign of revenge. It begins with smashing up each other’s property. It culminates in B.B. seducing Nora.

The twist? Tilley says he doesn’t care. Nora? B.B. can keep her. He throws all of her stuff onto the lawn and she moves in with B.B., who, in another twist, finds he actually likes having someone at home who gently pushes back every time he floats another petty gripe. That stability comes at a good time too given Tin Men’s big subplot, which involves a government committee out to expose all the schemes these salesmen use to pressure customers into buying a product they don’t really want.‍

Tin Men is a handsome-looking film, from an era when Hollywood studios (in this case Disney’s defunct Touchstone Pictures) could spend a little money, and even make a little money, on a mature comedy with bankable stars. Levinson has always been known more as an actors’ director and a storyteller than as a visual stylist; but in his ’80s and ’90s heyday, when his movies were perennial Oscar nominees, he did have a recognizable style. He liked to linger on faces, and then catch the eye with a few memorable moments of lyricism and beauty. In Tin Men, he mostly saves these for the romance between B.B. and Nora, whom we see kissing behind beveled glass, and later professing their love for each other in a rainstorm. Levinson and his crew also lovingly capture his beloved Baltimore: the pit beef purveyors, the rowhouses, the Domino Sugars sign, the waitresses and housewives who call everybody “hon.”

But there’s a reason why I personally have loved Tin Men since I saw it in its original run, and why, if you’ll pardon this bummer note, I’ve been thinking about Tilley more and more over the past decade, as social media solipsism has bled into real-world authoritarianism. With this movie, Levinson captures something all-too-true about a certain type of man, who has a distorted view of his place in the world and a warped sense of ethics, born of years spent stretching the truth.

Don’t get me wrong: The men of Tin Men are as fun to hang out with as the Diner boys, with their funny observations about the TV show Bonanza and their colorful stories about some of their greatest scams. But they’re also maddening, with the way they have to be right all the time—even if that means misinterpreting or ignoring what other people are saying.

It’s easy to see why Nora might’ve loved Tilley once. But it’s also easy to see why she has to leave him. In their first scene together, she mentions they should spend more time with each other, but he can’t get past that her first suggestion for a fun outing is a picnic. (“You sit in the grass and eat. Why is that fun?”) Later, he gets indignant when a customer he lied to about the cost of an aluminum siding job turns out to be a deadbeat. How dare this sucker waste Tilley’s time!

That’s who Tilley is. He’s the same kind of guy who recurs in cinema in the Maysles brothers’ documentary Salesman and in the movie version of David Mamet’s Glengarry Glen Ross, and in the real world these days on cable news. The Tilleys of the world are always with us: blustery, self-absorbed, and perpetually exasperated that the people they’re trying to cheat won’t just play along.

Noel Murray is a freelance film and TV critic who writes for The New York Times, The Los Angeles Times and others. His Twitter handle is @NoelMu.