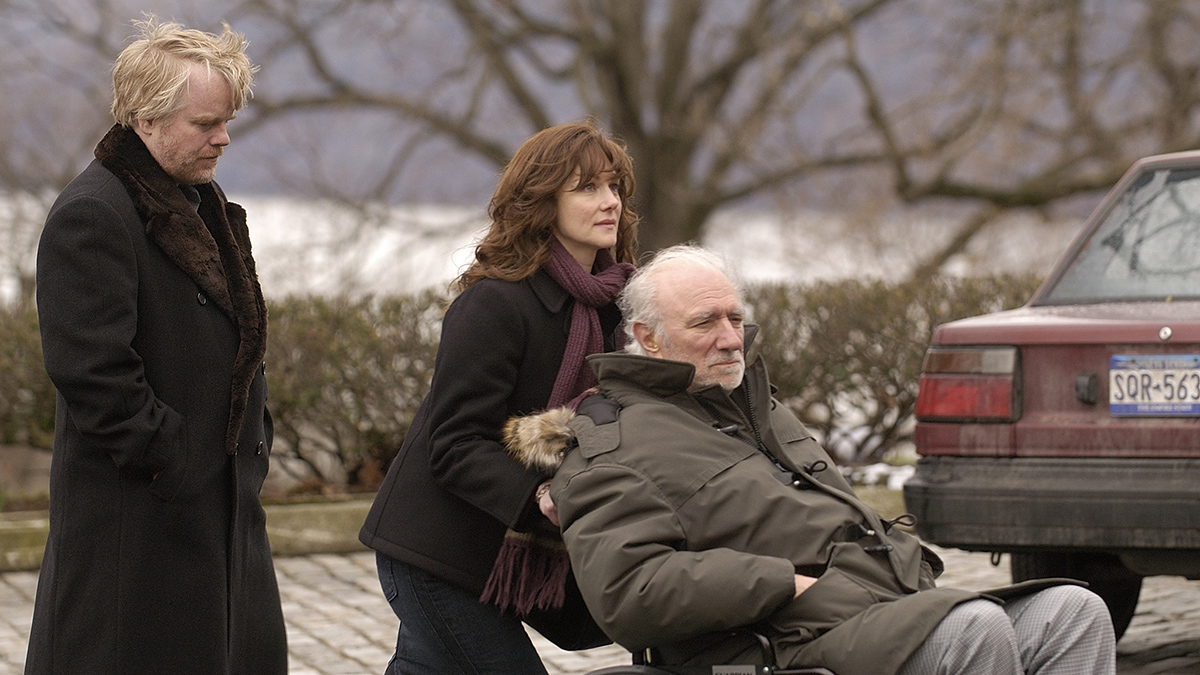 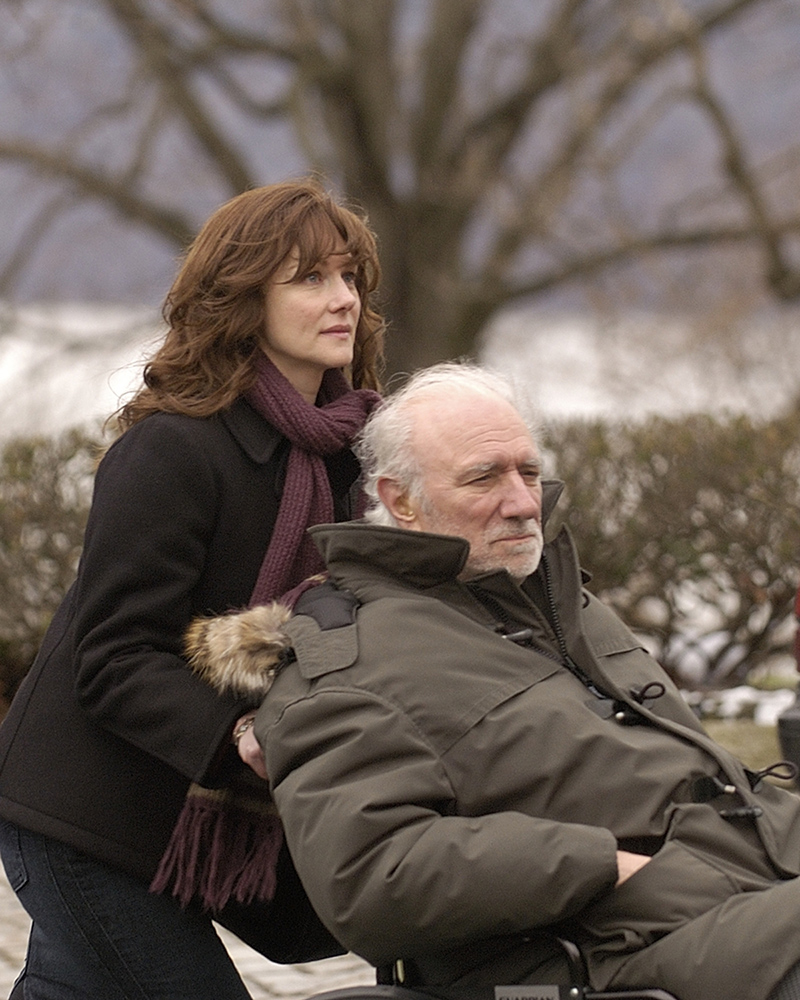 At first glance, Tamara Jenkins' sophomore feature resembles a typical "Sundance film," but it's much thornier than typical indie fare.

he canon of films about dementia has greatly expanded in the past 15 years, incorporating a mix of prestige dramas, art films, and genre fare. Anthony Hopkins and Julianne Moore won Oscars for their performances as characters suffering from severe cognitive decline in The Father (2020) and Still Alice (2014), respectively. Michael Haneke’s Amour (2012) and Gaspar Noé’s Vortex (2021) follow elderly couples who struggle as the mental and physical health of one wanes faster than the other. Thrillers like Remember (2015) and Memory (2022) feature aging men racing against their mental clocks while also dealing with their uniquely violent circumstances. The Leisure Seeker (2017) and Relic (2020) employs genre conventions (road trip and psychological horror) to explore the issue. The list goes on.

These films generally chronicle the gradual deterioration of a character’s mental acuity. We watch from the front row as they initially forget things or become easily confused; eventually, the disease progresses and suddenly they can’t remember where they are or the identities of close family members. By the end, they’re a mere shell of their former self. In crucial ways, The Savages (2007) follows this trajectory: the film begins with Lenny Savage (Philip Bosco, in his final on-screen film role) smearing his shit all over the mirror of his bathroom in a fit of confusion, follows him slipping into dementia, and concludes with him unceremoniously dying in a nursing home. But director Tamara Jenkins doesn’t foreground Lenny’s decline. Instead, it occurs in the margins and the background as his two estranged adult children—Jon (Philip Seymour Hoffman) and Wendy (Laura Linney), the younger of the two—band together to care for him.

The Savages premiered at the Sundance Film Festival, an appropriate venue given that its premise—a dysfunctional American family comes together in a time of crisis—broadly fits into the festival’s conception of “independent film.” (Though these type of Sundance films continue to be produced and distributed unabated, they’re generally much less self-consciously quirky than they were over a decade ago. Even The Savages’ trailer plays up the whimsy in its montage, soundtracked by two ’00s-era indie rock songs: Spoon’s “The Way We Get By” and “Up” by Rob Crow, best known as the frontman of Pinback.) However, Jenkins’ film stands out from the family dramedy pack for a variety of reasons, but a large one is her studious aversion to emotional clichés. All three of Jenkins’ feature films are semi-autobiographical: she mined her transient, lower-middle-class childhood for Slums of Beverly Hills (1998), her fertility troubles for Private Life (2018), and her experience taking care of her dying father with The Savages. But she doesn’t merely coast on personal familiarity. Instead, Jenkins lends each film authenticity by emphasizing the mundane bureaucratic elements and small details from each episode in her life. That standard of realism provides each of her films with emotional resonance that can’t be accomplished with a broad-strokes, good-for-all-time-zones approach.

Much like Kenneth Lonergan did with his debut feature You Can Count on Me (also a film about reunited siblings co-starring Laura Linney that premiered at Sundance), Jenkins imbues The Savages with world-weary maturity and fine-tuned characterizations. Technically, Wendy and Jon are emotionally stunted adults, but they’re not mired in arrested adolescence either. Both of them have genuinely adult problems. A theater professor endlessly plugging away on a book about Bertolt Brecht, Jon can’t commit to his Polish academic girlfriend, Kasia (Cara Seymour), who’s forced to return to Kraków after her visa expires. There are practical considerations that transcend love, he insists to Wendy: “Do you have any idea how many Comp Lit critical theory PhDs there are running around this country looking for work? Even if Kasia and I did get married and she stayed, she could end up teaching at some university that’s farther away from here than Poland.” But, of course, there are personal reasons as well.

Meanwhile, Wendy, an unsuccessful playwright, temps in New York City while trying to get some grant money to fund her “subversive, semi-autobiographical” play about her childhood groaningly titled Wake Me When It’s Over and ostensibly inspired by Jean Genet, Lynda Barry, and Eugene O’Neill. She sleeps with Larry (Peter Friedman), a married older man, and occasionally lies to him about medical conditions for attention. Jenkins renders Wendy the more restless of the two, someone whose aspirations are just out of reach and whose emotional wiring has been frayed for a while. But Linney never plays Wendy like someone who’s completely off the rails or even that tightly wound, but rather just another creative person in their late-30s still trying to get a project off the ground, like Seymour Hoffman plays Jon as just another unheralded academic accustomed to his professional rut. They give two of the best performances of their careers in The Savages by stressing the characters’ ordinary qualities endemic to their respective, rarefied fields.

Though it’s possible to draw a line from Jon and Wendy’s personal problems to their father’s treatment of them as children, Jenkins never presents it as a straight line. She only implies that Lenny physically and emotionally abused them when they were young, and when she finally explicates it, it comes in the form of a brief, theatrical representation of the violence. The contemporary language of trauma is absent from The Savages and it’s all the better for it. Their lingering pain comes through in the curt ways that Jon speaks to their father and Wendy’s guilty attempts to improve his living situation. Though Lenny occasionally barks insults or inanities, he mostly remains a silent presence befitting his mental state. He fades away without an apology to his children or any redemptive moment. The latter point apparently stuck in the craw of some executives when Jenkins was shopping around her screenplay much to her irritation. “Well, the father has dementia, so it’s not going to happen!” she told Dennis Lim in his The New York Times profile of the director ahead of the film’s release. “Luckily I’d set it up in such a way that it could never happen. It must have been some unconscious ploy.”

Jenkins focuses on the daily burden of caring for an elderly parent: the various pamphlets, the unhelpful support meetings, the futile efforts to decorate a depressing nursing home room, the division of labor, the financial headaches, and the difficulty of shuttling them from place to place in cars and low-rent wheelchairs. (A harrowing plane trip involving Lenny’s incontinence has been seared into my brain since I saw the film in theaters.) The Savages never depicts Jon and Wendy’s efforts as heroic, but merely what’s expected from them even though it’s obvious Lenny doesn’t really deserve their compassion.

Humor trickles through in offhanded line deliveries and tense exchanges between Jon and Wendy, save for the gloriously uncomfortable sequence where the two of them screen The Jazz Singer (1927) for Lenny and the other members of his nursing home without realizing how the film’s prominent use of blackface might be received by every Black person in the room. (“You can’t judge it by today’s standards. You have to look at it in a historical context,” an embarrassed Jon mutters to Wendy while trying to avoid the gaze of every Black employee in the home.) But Jenkins punctuates every comedic moment with a note of sorrow or a reminder of one’s mortality. The moment when Lenny doesn’t recognize Wendy, a “classic” scene in dementia films, occurs after a broad sequence featuring Wendy furiously searching the floor for her father’s big red pillow, eventually snatching it from the hands of another elderly resident. Jenkins frequently zigs rather than zags in The Savages. Wendy’s relationship with a nurse (Gbenga Akinnagbe) at the home develops as you’d expect, but ends on a warmly abrupt note. Her affair with Larry flourishes sans authorial judgment and contains so much warmth and understanding even when it ends for predictable reasons.

Mostly, however, Jenkins avoids any simplistic takeaways about aging or parental care. Jon and Wendy don’t learn any pat lessons watching their father die; in fact, Jenkins portrays Lenny’s death as inevitable and underwhelming. (“That’s it?” Wendy remarks when he finally goes.) Any growth they experience largely occurs parallel to the event. By the end, Jon and Wendy just further commit to their own lives while vaguely promising to stay in each other’s. Wendy begins to stage her play, though it’s unclear if it will lead to any further creative opportunities; Jon plans to see Kasia when he’s at a conference in Poland, but any shot at marriage remains in permanent doubt. The Savages’ only message is an obvious one: death is “gaseous and gruesome and it’s filled with shit and piss and rotten stink,” to quote Jon’s furious rant to his sister, and it happens to all of us. But life continues, without any fanfare or much recognition, especially after we’re gone.

Vikram Murthi is the editor of Downtime Magazine. He’s also a contributing writer to The Nation and freelances at Reverse Shot, Filmmaker Magazine, Vulture and sundry other publications.