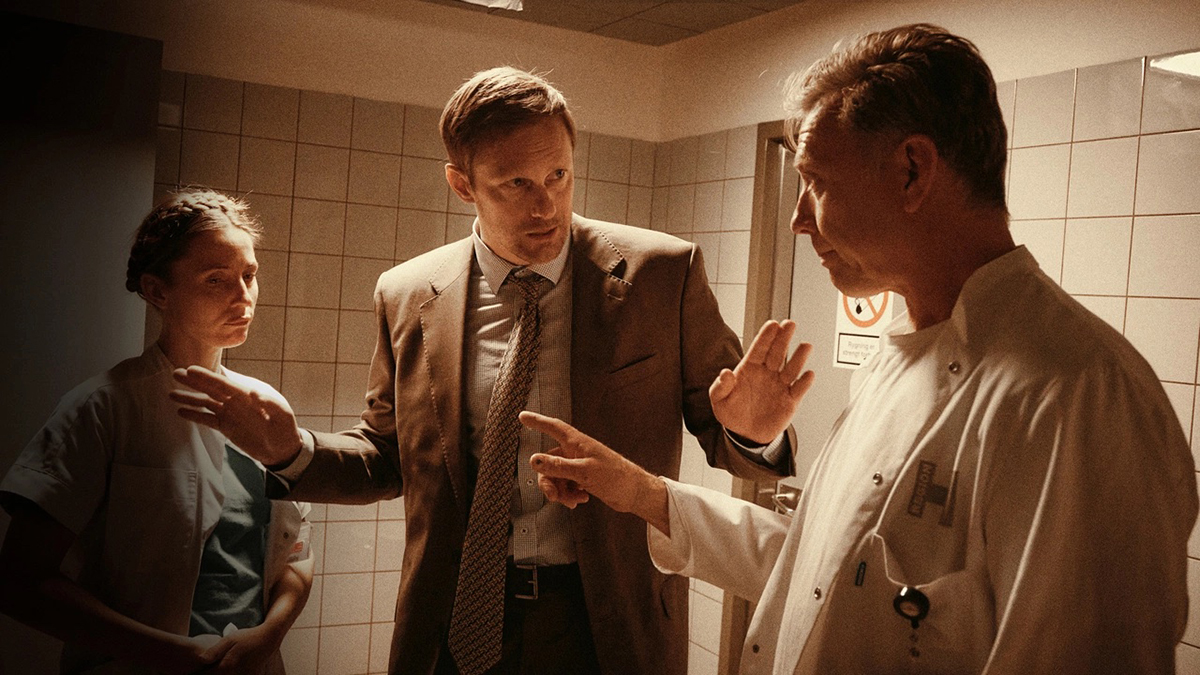 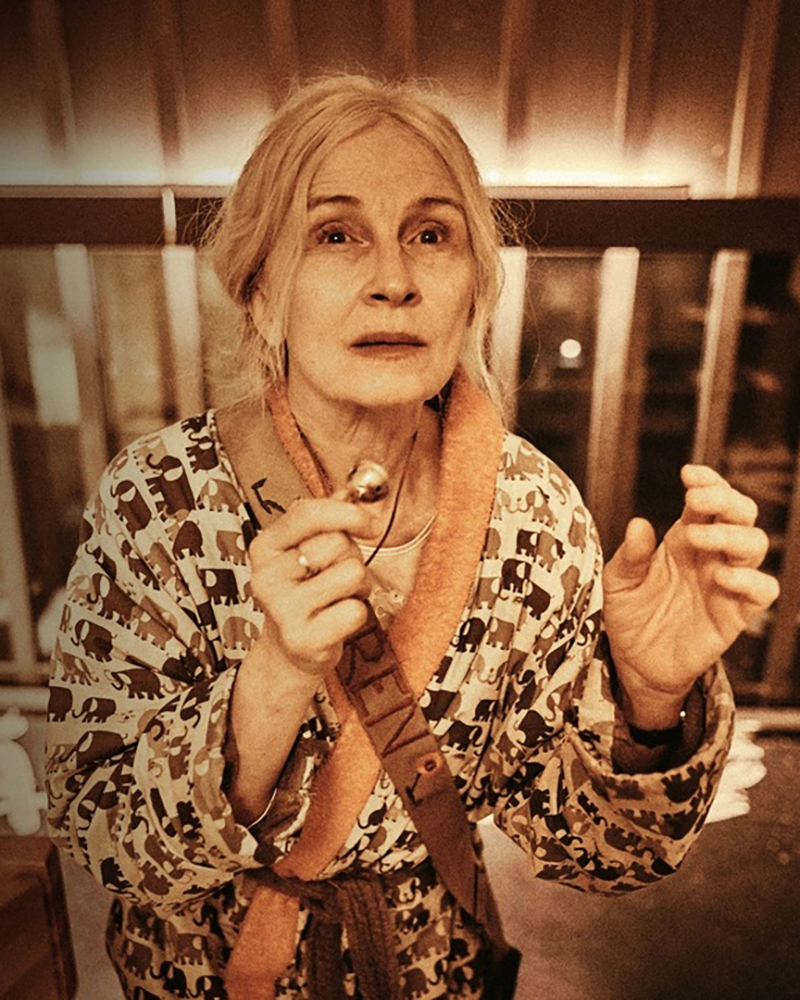 After a 25-year-long hiatus, Lars von Trier returns to the haunted hospital of his landmark supernatural miniseries.

n an alternate timeline not too different from our own, Lars von Trier is a beloved director of pop-surrealist fantasias and dry Scandinavian cringe comedy. One could argue that those elements are already present in his work as a divisive, doom-laden provocateur: A fox croaking “chaos reigns” while it rips its own guts out is pretty damn surreal, while The House That Jack Built (2018) uses wicked jokes to cut through the shock value. But finding the good humor amid the bitter misanthropy and harassment allegations can be difficult—for von Trier, as self-hating an artist as there’s ever been, as much as for anyone else. But if, like me, you’re still clinging to this particular problematic fave because you wept through the entire end credits of Melancholia, here’s some good news: Lars von Trier does know how to have a good time. You just have to watch The Kingdom to see it. ‍

An avowed fan of David Lynch, and of Twin Peaks in particular, von Trier said in a 2021 interview, “The funniest thing is to tease and not reach a conclusion.” (Lars von Trier thinking it’s amusing to fuck with his audience? You don’t say.) He also adds that he admires Lynch’s ability to create intuitively— something he, a self-proclaimed overthinker, struggles to do. Twin Peaks looms over The Kingdom, his cult ’90s TV series that, like Lynch’s, blends soap opera, quirky characters, and high strangeness. That would make The Kingdom: Exodus, which sees von Trier returning to The Kingdom 25 years later, the Danish equivalent of Twin Peaks: The Return. The comparison holds, with or without the owls.

Like Twin Peaks, The Kingdom—a supernatural dramedy about a haunted hospital that sits over an ancient swamp smack in the middle of Copenhagen—lasted for two seasons in its original incarnation. Also like Twin Peaks, it ended its initial run on a messy and inconclusive note. The Kingdom: Exodus opens with a self-deprecating joke about this lack of resolution, as an elderly woman named Karen (Bodil Jørgensen) shuts off her TV with a frustrated huff. “How can they peddle such half-baked hooey? That’s no ending,” she mutters, before tying herself to her bed in her modest cottage. (Karen is a sleepwalker, you see.) In line with the dream logic that will prevail for the rest of this series, she subsequently falls asleep, unties herself, gets into a waiting cab (“It’s all taken care of,” the driver assures her), and takes off for Rigethospitalet, a.k.a. The Kingdom, where she has herself checked into the neurosurgery ward in hopes of finally exposing the hospital’s secrets.

A security guard rolls his eyes at Karen when she wanders into the hospital lobby asking to speak to a character from the original Kingdom, saying that Rigethospitalet’s creepy reputation is “a figment of that blundering fool von Trier's imagination.” Such withering, self-imposed potshots at the show’s creator dot The Kingdom: Exodus. (Von Trier, who served as a talking head in The Kingdom seasons one and two, appears here as a pair of feet sheepishly sticking out from behind a red velvet curtain.) This repentance is at least partially performative; a subplot involving sexual harassment seems designed specifically to offend feminists, for example. But if you’re holding a grudge against von Trier for whatever reason, watching the bad boy of Danish cinema repeatedly metaphorically punch himself in the face is rather satisfying.

Much of the humor on The Kingdom: Exodus is, to be frank, kind of silly. Take the show’s hatred of the Swedish, a holdover from previous seasons that allows von Trier to repeatedly humiliate arrogant Swedish doctor Helmer Jr. (Mikael Persbrandt), son of the previous series’ arrogant Swedish doctor, with intra-Scandinavian ethnic punchlines. (Think flimsy wooden furniture and an unearned sense of superiority.) Then there’s the comic incompetence of the show’s hospital staff, who are so preoccupied with their petty rivalries that they have no idea there’s a mini-Ragnarök brewing in the hospital basement. These blend with the show’s more bizarre elements to create something approaching a sense of whimsy, something I’d never thought I’d say about a Lars von Trier project.

This intersection of surrealism and exaggerated idiocy gives The Kingdom: Exodus its other point of comparison: Garth Marenghi’s Darkplace. Unlike Twin Peaks, which von Trier openly acknowledges as an influence, Darkplace is an accidental touchstone. Both shows take great joy in puncturing the egos of “godlike” surgeons, and both layer horror tropes on top of silly jokes. (For example, a doctor performs surgery on the literal beating heart of the hospital, which is so large it takes up an entire utility closet.) However, Exodus’ humor is much drier and depends more on uptight Scandinavian manners than exaggerated genre tropes. ‍

The Kingdom: Exodus also indulges its fans more than Twin Peaks: The Return. Previous plotlines are echoed, fan favorites return, and those who don’t come back have their ultimate fates explained—even if that fate is having their ashes crushed in a trash compactor. Von Trier darlings make delightfully weird cameos, including Udo Kier as a giant head drowning in a puddle of its own tears and Willem Dafoe staring down the camera and ranting about Satan. The dishwashers with Down syndrome who served as narrators in the first two seasons are replaced with equally lovable misfits, in this case a 25-year-old actor with progeria (Jesper Sørensen) and a robot arm that smashes more plates than it washes. (By the way, at the beginning of the fourth episode, that robot arm gives a monologue about Babylon, the mother of harlots and abominations of the earth. If that idea amuses you, watch this series.)

For all its wild ideas, Exodus hews to a surprisingly conventional structure and pace. But this just gives the weird shit more room to roam. We never find out what was up with the bleach ponds underneath the hospital, or the mutant baby with spider legs and sharp, shark-like teeth that lives in the walls. No particular reason is given why this is the only structure in Europe with more hidden tunnels than the ballet school in Suspiria, or why the Swedish members of the hospital staff are re-creating The Seventh Seal on the roof towards the end of the final episode. And, perhaps most curiously of all, why is all of this happening on Christmas?

Much of Lars von Trier’s work strains under the weight of its creator’s urgent need to make his audience understand his suffering. By contrast, there’s a playfulness to Exodus’ grab bag of apocalyptic symbolism. Lynch’s influence frees von Trier from having to make everything mean something, lifting his burden by reminding him that none of this matters. So what if the shadow of death looms over all human endeavors? So what if good intentions don’t matter? So what if the world is upside down and the people in charge are even stupider, more selfish, and more tribalistic than the rest of us? The Kingdom: Exodus sees von Trier laughing as the world burns, pulling down his pants to fart in the Grim Reaper’s face. And honestly, it’s just nice to see him having a little fun.

The Kingdom: Exodus begins streaming on Mubi on November 27. New installments will be available to stream every Sunday with the fifth and final episode premiering on Christmas Day.

Katie Rife is a freelance writer and critic with a speciality in genre cinema. She worked as the News Editor of The A.V. Club from 2014-2019, and as Senior Editor of that site from 2019-2022. She currently writes about film and TV for outlets including Vulture, Rolling Stone, Entertainment Weekly, Indiewire, and Polygon.