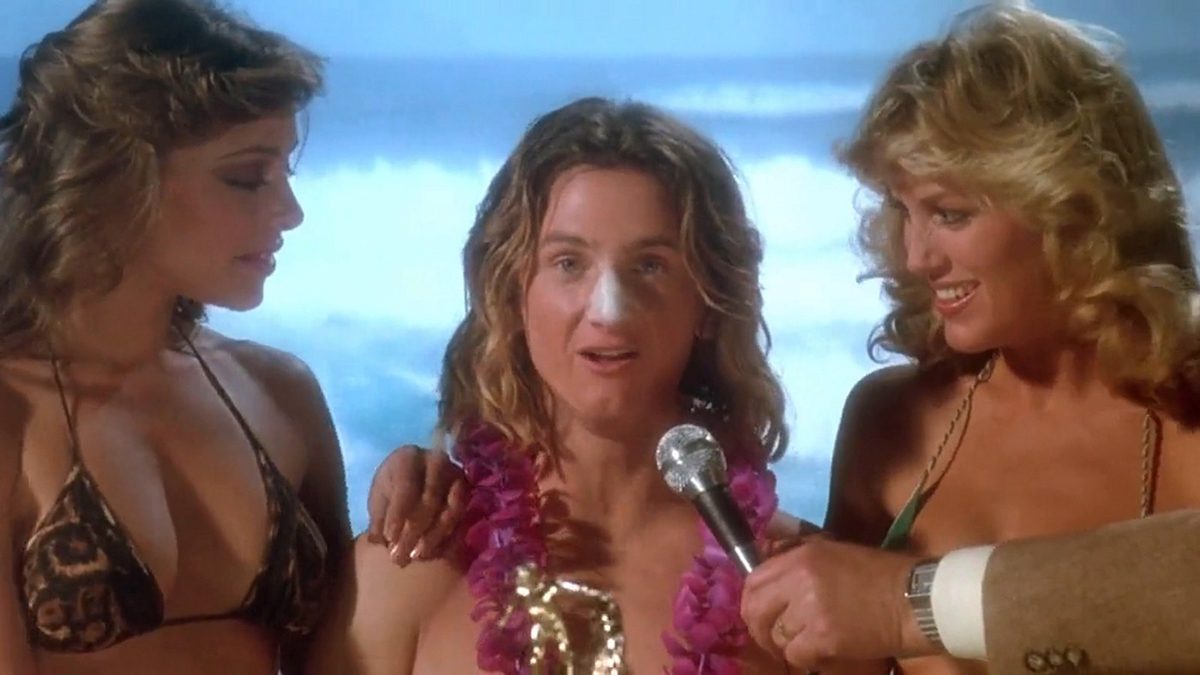 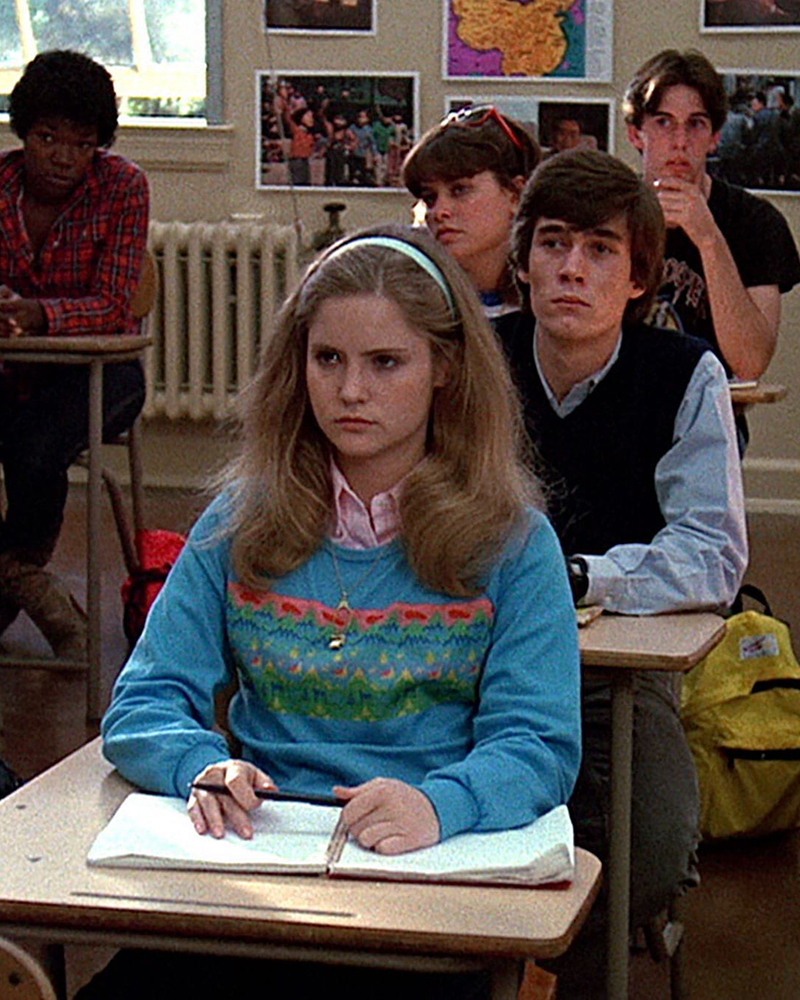 Amy Heckerling's indelible debut feature captures early-80s adolescence in all of its complex glory, minus the judgement or sanctimony.

o one would ever call Fast Times At Ridgemont High a religious picture, but it has a cathedral. That cathedral is Ridgemont Mall, where the film’s indelible opening sequence takes place over the incantatory riff of the Go-Go's "We've Got the Beat." It's a neon, capitalist Oz, palpably vibrating with the potent cocktail of runaway commerce and hormonal overdrive. A flawless piece of cinematic worldbuilding, the mall-centric opening montage moves like quicksilver and introduces us to the movie's terrific ensemble of young actors. It subtly but meaningfully alludes to the theme of class, which threads through the film with a perceptiveness superseding its drugs-and-cooze purview. Growing up fast doesn’t just mean partying.

Amy Heckerling’s year-in-the-life 1982 teen opus resides alongside Casablanca and Alien in the highly-specific category of genre films that over delivered relative to audience expectations. Its attitude towards teenage carnality and drug use cheerfully skips past the non-judgmental and lands someplace close to the celebratory. The girls are as horny as the boys, and the boys are as catty as the girls. Parents are an off-screen abstraction, referred to but never witnessed. And yet, read a certain way, Fast Times is a moral coming-of-age story, one that evinces a real affection for its characters. It’s cringeworthy fun watching them fuck up, but you believe in their earnestness and basic decency. It’s maybe the finest film ever made about the magic formula of youthful resilience.

The splendor of the mall aside, the fictionalized Southern California town Ridgemont is unglamorous. All of the kids have jobs and it doesn’t feel like an option. They live in modest, unlavish houses—although, the Hamilton siblings' backyard pool is the source of unending complications and shenanigans. These are the American suburbs of the early ’80s, before Reagan’s great upward-wealth redistribution would induce the investor class to bulldoze modest family homes and replace them with garish monuments to their endless vanity.

In significant ways, the teens in Fast Times are remarkably responsible. One of the film’s funniest arcs involves Judge Reinhold’s inimitable Brad Hamilton, a senior locked in an escalating series of dignity-robbing minimum wage jobs. He is browbeaten by managers, verbally abused by customers, made to wear humiliating outfits, and finally robbed at gunpoint. But Brad has his limits and a special way of triumphing over his context. When a particularly despicable customer demands his money back at a greasy spoon—unctuously citing its ephemeral promise of “100% satisfaction guaranteed”—Brad tolerates his bullying up to a point. But when lines of decency are crossed, he pushes back: “Mister, if you don’t shut up, I’m going to kick 100% of your ass!” For the crime of being unquestionably in the right, he gets fired. He protests in vain, but then goes and finds another job.

Brad’s younger sister Stacy, a freshman portrayed with heartbreaking vulnerability by Jennifer Jason Leigh, spends the movie attempting to navigate the tricky space between sex and love. Her first boyfriend is a 26-year-old stereo salesman; she’s 15. She later falls for an age-appropriate classmate, has a sweet but confusing date with him, and then ends up hooking up with his double-dealing best friend, an unsatisfying experience resulting in an unwanted pregnancy. In a scathing review of Fast Times, Roger Ebert commenced with the hand-wringing lede: “How could they do this to Jennifer Jason Leigh? How could they put such a fresh and cheerful person into such a scuz-pit of a movie?” Ebert was wrong about the overarching merits of the picture, but correct in a way about Leigh’s Stacy—it’s deeply uncomfortable the way Fast Times presents her nascent sexual experiences as both titillating and confusing. But there’s truth in it as well. Heckerling expresses something important about the profoundly contradictory experience of female adolescence. It’s difficult to imagine a male counterpart bothering with such complexity.

Crucially, Stacy is not naive. When her ne’er-do-well would-be paramour Mike Damone (Robert Romanus) fails to come up with his half of the money for an abortion, and doesn’t even bother showing up to give her a promised lift to the clinic, she grabs a ride from her brother. Though she tells him she’s going bowling, Brad susses out the situation and picks her up from the clinic before she’s forced to take a bus home. Their awkward, tender understanding at such a vulnerable moment makes for one of the most moving scenes in the picture.‍

Fast Times embodies a curious hybrid of Eisenhower-era values and the hangover of ’60s dropout culture. Those ideologies meet head-on when the buttoned-up history teacher Mr. Hand (Ray Walston) discovers Sean Penn’s checked-out surfer Jeff Spicoli has enrolled in his class. As two-man acts go in American cinema, very few are funnier than Penn’s geometrically stoned Spicoli and Watson’s hilariously rendered ornery-old-cuss of a teacher. If this were Caddyshack—and no one’s knocking Caddyshack—Mr. Hand would be a two-dimensional killjoy whose simmering anger at Spicoli’s disruptive antics would prove that his only purpose in life is to get off on his middling authority.

But that’s not Mr. Hand’s situation. Yes, he’s a bit of a hard-ass, but he believes in history, and believes that young people will benefit from learning it. Like Brad Hamilton, he’s here to do a job. So when a visibly addled Spicoli shows up late, or orders a pizza to the class, or calls him a dick, Mr. Hand sincerely does not appreciate the disruption. On the night of prom, Mr. Hand shows up unannounced at a shocked Spicoli’s house holding a stack full of textbooks and bent on recovering his wasted time. It's exactly the karmic reversal we didn’t quite know we were waiting for. They reach a detente: Spicoli pays attention, sort of, and Mr. Hand assures him he’ll squeak by and not fail history. In an intimate space, you realize what should have been obvious all along. The dynamic isn’t rebel versus authority, it’s father and son. ‍

Fast Times ends where it begins—at the cathedral. A lot has happened in Ridgemont during the film’s twelve month span, but the teens, all slightly wizened versions of themselves, are back at the mall. In the film’s last great exchange, Stacy tells her best friend and periodic bad-advice giver Linda (Phoebe Cates), “I don’t care about sex. I want a relationship. I want romance.” With characteristic pragmatism, Linda wittily rejoins: “In Ridgemont? We can't even get cable TV here, Stacy, and you want romance.” The world might not be their oyster, but the kids are alright. They’re going to keep pushing and they're going to get cable. Romance might just be in the cards too.

Elizabeth Nelson is a journalist and singer-songwriter based in Washington, DC. Her work appears regularly in The Ringer, Oxford American, Pitchfork, New York Times Magazine and other publications. Her band the Paranoid Style’s latest LP For Executive Meeting was released in August on the Bar/None Records label.