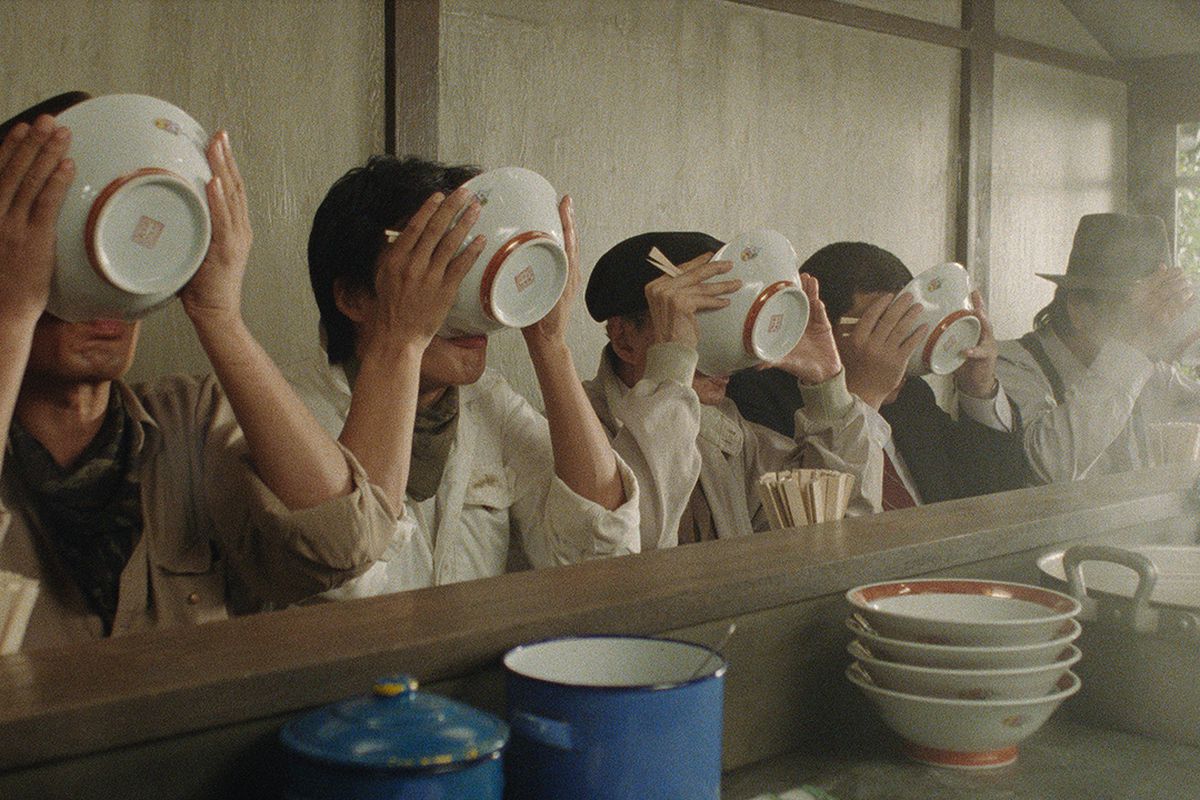 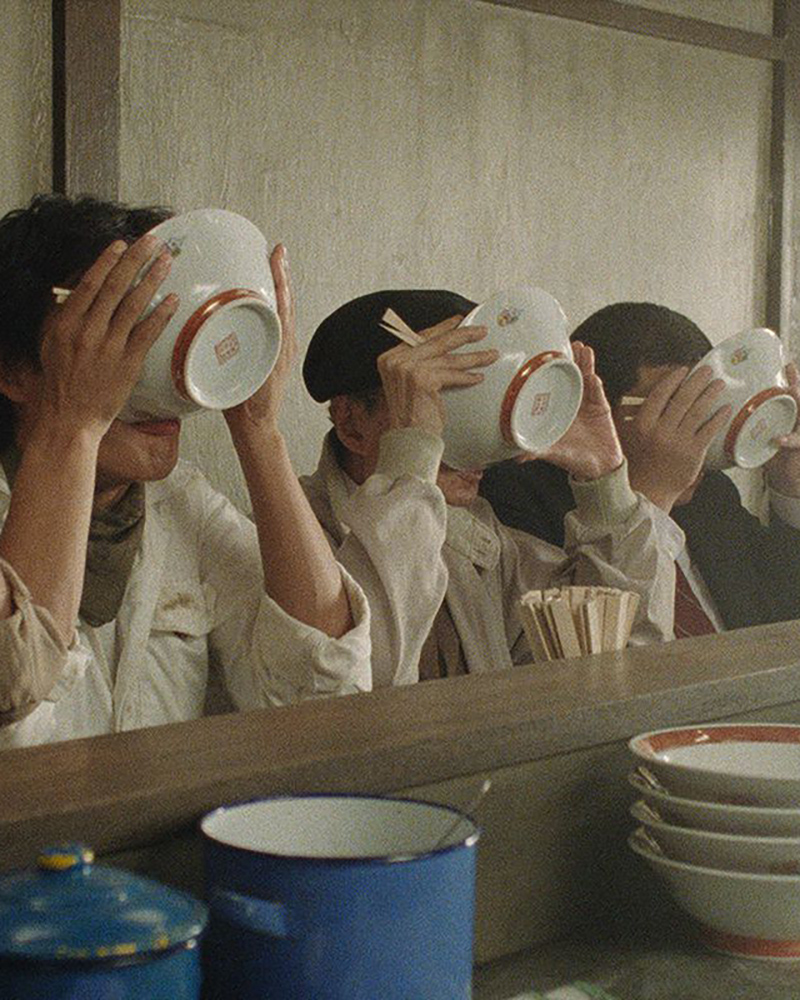 arly in the Japanese film Tampopo (1985), two men sit down in a restaurant. The older man has “studied ramen for 40 years” and the younger is eager to be “initiated into the art.” The master describes an intricate process one should observe with the dish, consisting of steps for contemplation of the noodles, careful consideration of (and a prayerful apology to) the slices of pork, and a highly regimented order in which each ingredient should be eaten. The sequence is a parody of the specific rituals we erect around food, and it ends with a punchline that perfectly sets the tone for the rest of the movie. The master taps a slice of pork against the side of his bowl before eating it. His student asks if this has any special meaning. Alas, he’s just shaking the broth off the pork. Not everything is so significant.

You may be familiar with the spaghetti western films of Italy from the ‘60s and ‘70s, but have you ever seen a ramen western? To date, Tampopo is the only one. As unabashedly silly as that self-proclaimed genre suggests, it applies the conventions of the western to a tale of a would-be restauranteur trying to hone her craft. For example, instead of horsemen moseying into town, two truckers drive the plot. Not only that, but writer/director Juzo Itami frequently evokes the style of westerns in the film’s construction—he frames and edits a trucker confronting a hostile noodle-shop patron in the same style as gunslingers staring each other down with itchy trigger fingers.

Those truckers—the experienced, world-wise Gorō (Tsutomu Yamazaki) and his protégé Gun (a young Ken Watanabe)—decide to lend a hand to the title character (Nobuko Miyamoto, Itami’s wife and frequent collaborator), a middle-aged woman who’s been widowed and left to raise a son and run a roadside ramen restaurant on her own. She knows little about making ramen; Gorō delicately says her fare has a “solid, honest flavor,” but that it “lacks pizzazz.” The trio embark on a quest to improve Tampopo’s ramen through rigorous attention to every element of the recipe. They run drills for shuffling pots of water around a kitchen and serving noodles into bowls, track down various “masters” to learn their secrets, and even resort to subterfuge to discover the tricks of their rivals’ trades.

But such a description fails to capture Tampopo’s odd, winning tone. We frequently detour from the main story to follow side characters having their own food-related (mis)adventures. Like the opening scene of the master and student at a ramen bar, each of these vignettes satirizes some aspect of common dining experiences or cultural mores around food and eating. An old woman ceaselessly fondles various items in a grocery store, with a hapless employee following the trail of ruined merchandise in her wake. A young businessman unwittingly shows up his bosses when he proves more proficient at ordering at a French restaurant. A ladies’ class on proper European dinner etiquette goes awry when a nearby foreigner sets a bad example for eating spaghetti. (Skip this scene if slurping noises trigger your misophonia.) A recurring subplot features a yakuza gangster (a coolly debonair Kōji Yakusho) who’s fixated on the intersection of food and sex. He and his moll find creative ways to incorporate lemons, sugar, whipped cream, and even live shrimp into their bedroom life. In one scene that’s weirdly, transfixingly erotic, they swap an egg yolk between their mouths, trying not to break it.

Some of these segments poke fun at specific elements of Japanese culture. The scene with the businessmen in the French restaurant, for instance, mocks the stringent code of manners built into office hierarchies in Japan. Others are easy to get no matter where you’re from—a man enjoys an ice cream cone after a much-needed dental procedure and shares this triumph with an errant toddler, despite the child wearing a sign from his mother explicitly asking people not to give him sweets. Itami gently mocks the everyday absurdities embedded in the conventions we build around common experiences.

But there’s more than satire at play here. Amidst the mildly tongue-in-cheek comedy, Itami offers a sincere tribute to the idea of perfecting one’s craft and taking joy in creation. Much like the yakuza love scene, the moment that best exemplifies this also revolves around eggs. Late at night, Tampopo, Gorō, Gun, and Tampopo’s son Tabo seek out an “old master” of ramen who lives among a cadre of homeless men with refined tastes. (They scrounge fine vintages of wine from the trash.) When Tabo gets hungry, one of the gourmand hobos breaks into a restaurant kitchen to make him omurice, an omelet on ketchup-infused rice. The camera pays close attention to the man’s precise, skillful taps on the pan to coax the egg mix into a shape with a cooked outside and gooey core. After depositing the omelet atop the rice, he slits it with a knife, causing it to perfectly fall open. The production developed this technique in collaboration with the restaurant Taimeiken, and it has since become a popular yet challenging way to make omurice. I’ve tried to do it several times, but haven’t yet mastered the proper technique of molding the omelet.

This freewheeling mix of genres and tones characterizes many of Juzo Itami’s films. But that mischievousness also got him into trouble. After he mocked the yakuza with much more gusto in Minbo (1992), three members of the Goto-gumi gang slashed Itami’s face. He turned his subsequent experience in the hospital into his next film, Daibyonin (1993). When Itami fell off an office building rooftop several years later, his family refused to accept that it was a suicide. A former Goto-gumi member eventually claimed to reporter Jake Adelstein that the gang had indeed murdered Itami to prevent him from making another film about them. If true, this would not be the first time the yakuza killed a filmmaker who crossed them.

How many other movies feature a novel omelet recipe and sexy egg play from a director who was possibly murdered by the yakuza? Still, for all its Jacques Tati-esque capers and western-style brawls, Tampopo ends on a tender note: a close-up of an infant nursing from their mother’s breast. This pleasant, simple image reminds us of food’s primal origins, how it’s inherently tied to community and intimacy. Tampopo actively encourages us to consider how the simple act of sitting down for a meal connects us with people and history. Anytime someone makes dinner or shares their personal peccadilloes surrounding food, they might as well be in their own personal Tampopo vignette, where the dish and its author are the stars.

Tampopo is available to stream for free on the Criterion Channel and HBO Max, and on Amazon Prime with a subscription to Filmbox Live. It's also available to rent and purchase from YouTube, Google Play, and Vudu.

Dan Schindel is a freelance writer and editor. He lives and works in New York.