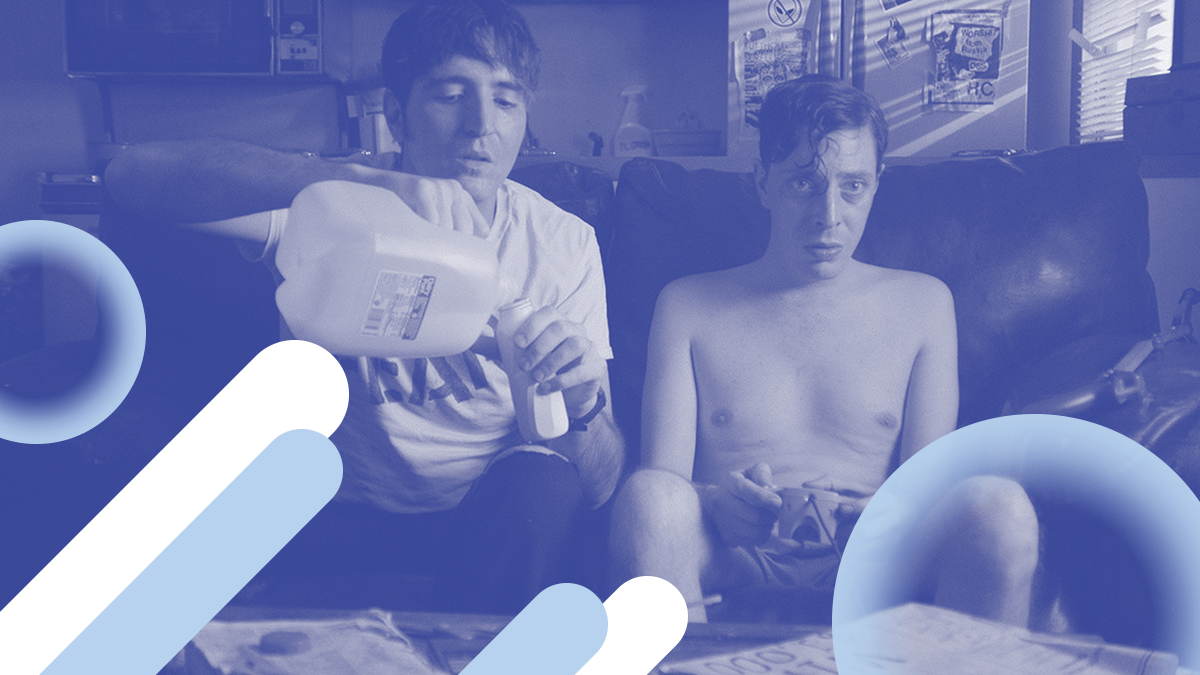 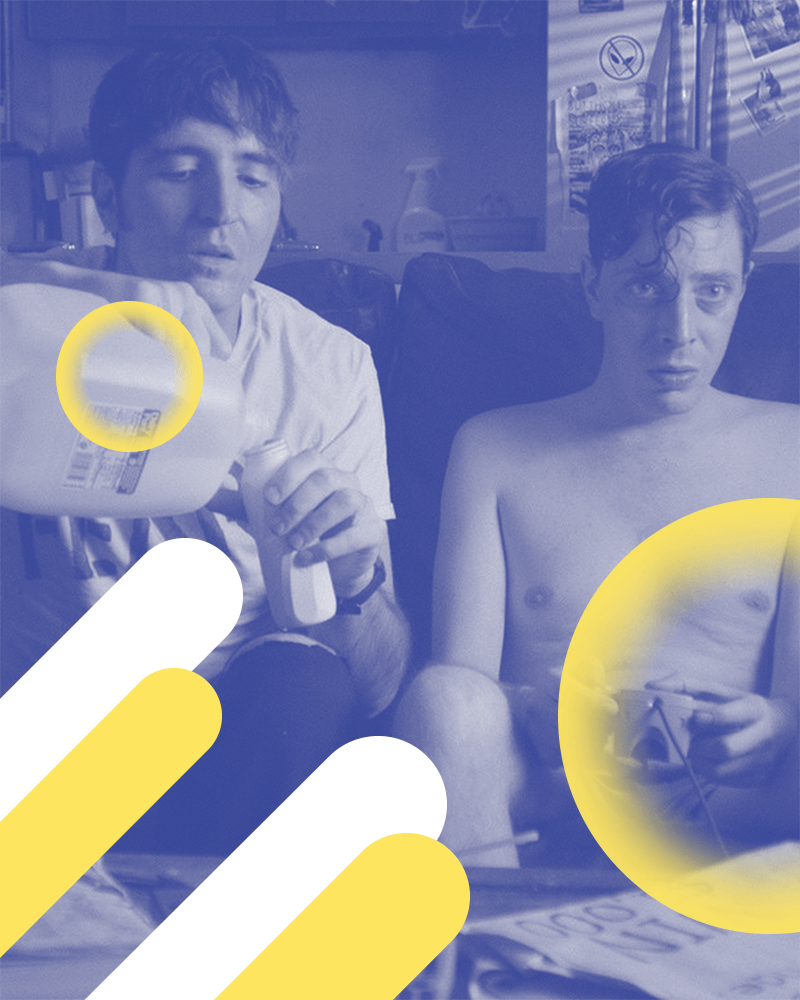 Potrykus specializes in offbeat, regionally-focused portraits of post-Linklater slackers on the edges of 21st century society.

eep in Relaxer we find Abbie (Joshua Burge)—covered in dried sewage, Midwestern winter crust, and God knows what other assorted fluids the body secretes by default—boiling and then gnawing at a shoe. Abbie hasn’t left the couch in months, lest he quit the “challenge” issued by his bullying older brother Cam (David Dastmalchian, convincing wad), which primarily entails  not getting up from the couch. The chunky, filthy locks of hair and beard surrounding Abbie’s stare, vacant behind novelty 3-D glasses long ago given to him by his absentee dad, suggest he may be losing his grip on the purpose of the challenge. The camera, unmoved by cinematographer Adam J. Minnick (a regular collaborator of writer-director Joel Potrykus), quietly revels in this fusion of furniture and man: the shot exquisitely detailed, both sticky-looking and weathered, drained of color but wreathed in dust and beatified by grainy shadows. All of time feels as if it’s converging on this moment, bound in this simple task, unable to go anywhere.

Abbie may have forgotten that Cam’s challenge involves beating the unbeatable Level 256 in Pac-Man without leaving the couch before New Year’s 2000 in order to win $100,000. It may have slipped his mind that Cam got this idea from a Nintendo Power found in a janitor’s mop bucket. He may have not made the connection between Cam’s subsequent refusal to return from a friend’s “compound” and the looming threat of Y2K. Regardless, however long it’s been or whatever he’s supposed to be doing, he cannot leave the couch. It’s 1999 and it’s about time he’s “quit quitting,” so he’s eating a shoe.

In the films of Joel Potrykus, slackers are mankind’s survivors—those failed most (and unfazed most) by capitalism, but also the ones who have to bear the brunt of it. At their best, they have the potential to protect us, to ingest the world’s poisons and keep the deluge of existential doom at bay, like avatars of the apocalypse. What might seem like laziness is actually acceptance, a kind of stasis brought on by knowing that this is pretty much it. Heart disease is waiting at 55. This is as big as this world gets. If Richard Linklater’s Slacker defines the titular shmoe as less a lazy youth and more of a person resigned to a tiny, insular world, unmotivated but also probably unable to get out, then Potrykus literalizes Linklater’s Austin into what is immediate: this mattress, this comedy club, this street, this office, this basement, this couch, this Nintendo 64, this screen, this skin. Potrykus’ slackers can see the true contours of reality.

Haunting a nowhere Michigan town (most likely Grand Rapids, where Potrykus has lived since college) in Ape (2012), flailing comedian Trevor (also Burge) wanders streets where only he seems to see men in gorilla costumes and the Devil, who is willing to trade him a suspicious apple for a joke. Professional temp Marty (also Burge) in Buzzard (2014) thrives on cheap scams, his slouching toward true slackerdom climaxing in Potrykus’ homage to Leos Carax’s Mauvais Sang (1986), metal music blaring in place of Bowie as Marty sprints down the street, brimming with an undeniably Midwestern feeling of freedom, where the real tragedy of your life is that the thing you were most worried about doesn’t matter. There is no freedom. Marty knows this; there is only a lack of health care, which you desperately need because you eat the worst food on earth. Sean (Ty Hickson), tweaking on pain killers because of his injured knee and/or medicating due to mental health issues, spends much of The Alchemist Cookbook (2016) alone in a trailer in a nondescript Michigan forest attempting to discover the secrets of alchemy and ply at the borders of known spiritual truth. His goal is to finally have enough money to eat Doritos and play video games and sit around with his cat all day.

Potrykus would probably never claim that Trevor or Marty or Sean are good people, especially in the ways they interact so casually with extreme violence, but he sympathizes with their existential plights anyway. He sees them simultaneously as victims of circumstance and masters of their domains. Something undeniably pure governs their lives, an amiable shamelessness, that lends Potrykus’ films a sense of spiritual calm, even at their tensest and grossest.

That purity manifests perfectly in Relaxer. Alternating long takes with coverage so fixed it never actually ventures past the approximately 90-square-foot space between the couch, TV, door, and makeshift soundsystem resting precariously on a shelf made of plywood and cinder blocks, Potrykus creates a sense of time that passes  meaninglessly. As Abbie progresses in Pac-Man and calls friends over a landline to beg them to bring him supplies, Cortez (Amari Cheatom) arrives along with Arin (Adina Howard), who may be a social worker or a nurse from a care facility in which Abbie stayed for a time. Relaxer never belabors, or even makes explicit, the obvious: Abbie and Cam’s dad is in jail in California for an event involving a minor and a rest station bathroom. Still, Abbie believes his dad will come back somehow.

Characters and motifs persist throughout Potrykus’ filmography, vaguely connected and anachronous, but still on the same slipstream. Just as there are many Lee Kang-shengs that persist throughout the films of Tsai Ming-liang, sharing maladies and occasionally lives, there are many Burges scattered through Potrykus’ space-time, each poor dirty soul barely concealing trauma and mental illness beneath Buster Keaton deadpans.‍

Relaxer’s Burge remains shirtless throughout, detritus accumulating around his nipples as he resorts to increasingly demented means of staying alive (without leaving the couch). There’s also the lingering possibility that Abbie has psychokinetic powers. When his friend Dallas (Andre Hyland) stops by, two 2-liter bottles of Faygo explode in his duct-taped hands. Perhaps it has to do with Dallas shaking them up so much, but likely it’s because of Abbie’s emerging gifts, which he can’t use for anything remotely helpful except to give Cortez a headache to get him to shut up about Abbie’s dad. There’s no real explanation for these powers, other than their realization in the ritual-like process of playing Pac-Man. Completing the challenge by the deadline is all that matters. A slacker’s kept alive by deadlines, whether they’re the glitch in Level 256 of Pac-Man or the Y2K glitch that many people once believed could tear the world apart. But Abbie’s world isn’t really torn apart by Y2K—if anything, it’s  the camera tripod he jams into the drywall next to the couch that does it.

Therein lies the abiding empathy of Joel Potrykus’ films. Suspending his slackers in time, confining them like chrono-monks to smaller and smaller monasteries, he grasps a painfully modern sensation better than any other contemporary filmmaker: This is all there is. And that’s OK. It’s a relief, actually. There will always be more time to reach enlightenment, whatever that means for you, even at world’s end.

Relaxer, as well as Joel Potrykus’ three previous features and his latest short film, are available to stream on The Criterion Channel. Relaxer is also available to stream with subscriptions to Amazon Prime and Kanopy, and is free with commercials on Tubi TV and Crackle.

Dom Sinacola is a writer, editor, and born/raised Michigander, now based out of Portland. You can find most of his recent work at Paste Magazine, and some of his much older work in the upcoming anthology cokemachineglow: Writing around Music 2005-2015. He’s also on Twitter.