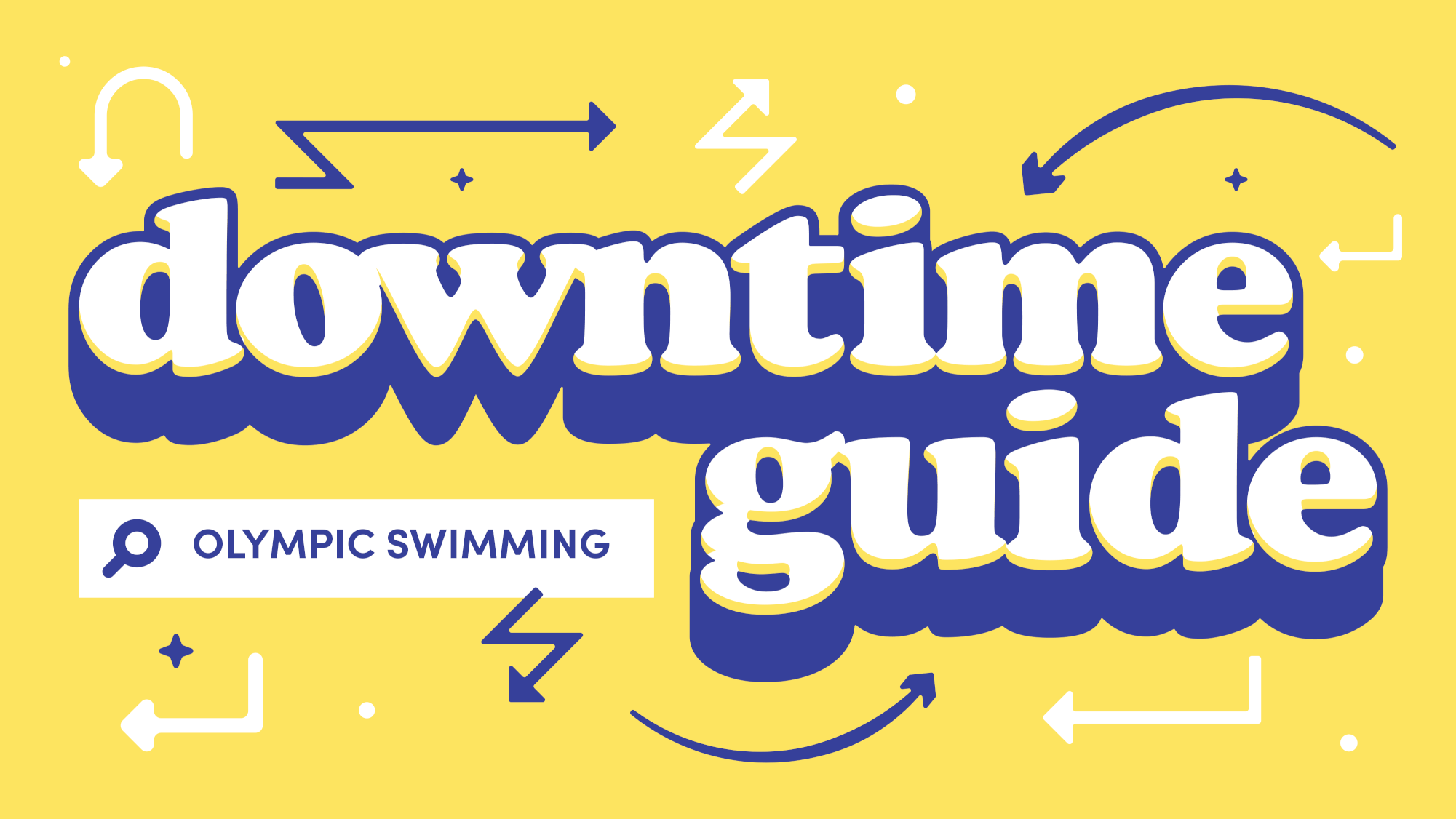 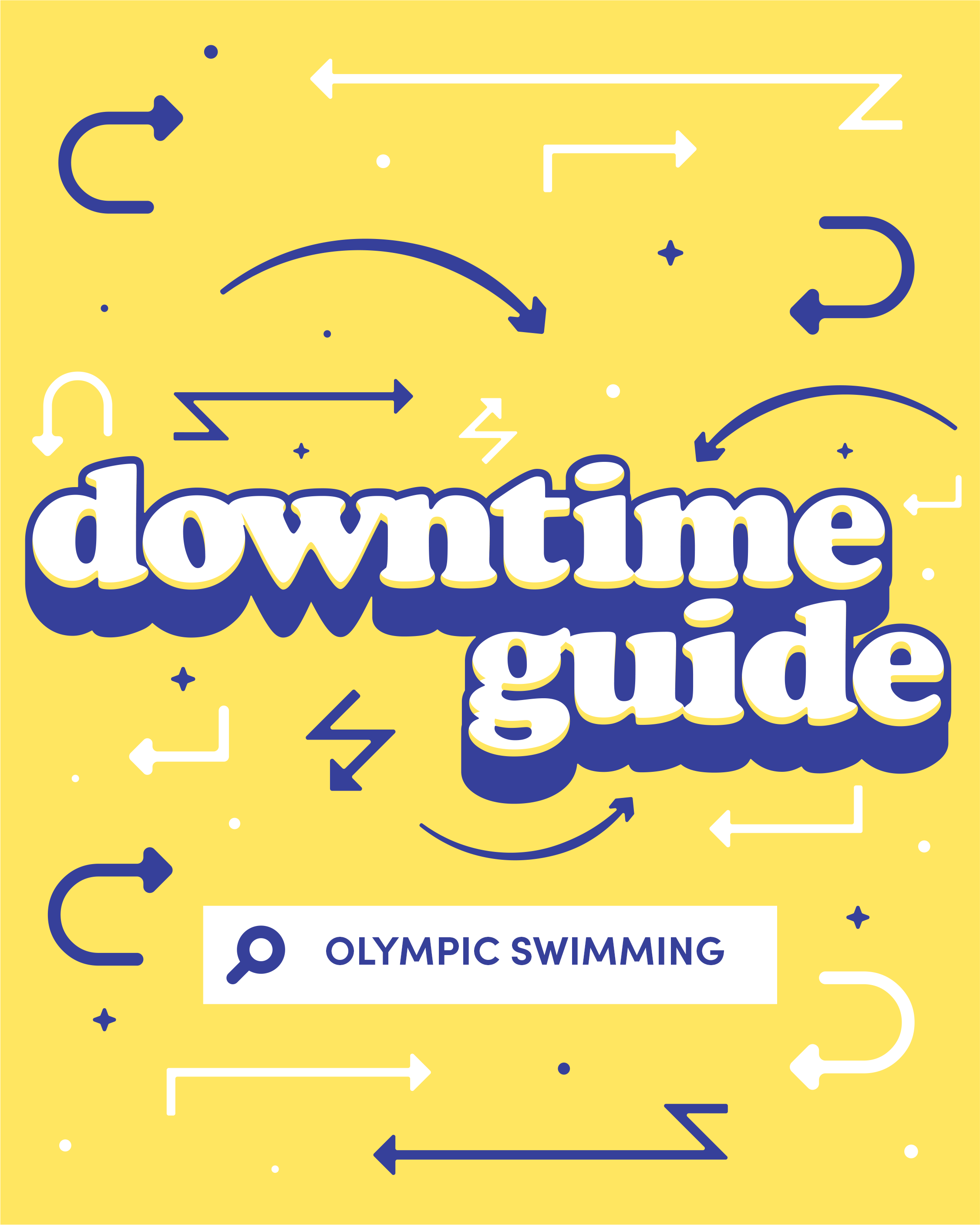 No Phelps? No problem. Let's go deep on the Olympics fun-to-watch and dramatic swimming events.

or the first time this century, the U.S. Olympic Team will not have Michael Phelps on its roster. The most decorated Olympian of all time was on the pool deck in Omaha when U.S. swimmers competed in June for spots in Tokyo, but he seemed content to stay dry, aside from some post-race hugs for his friends still in the water.

And while the U.S. has other veteran swimmers returning to the Games, the men’s and women’s teams as a whole are much younger than in recent Olympics. Ten of the 26 women on Team USA are teenagers, four of whom have yet to enter college. Taking up Phelp’s mantle as a leader of the men’s team will be 24-year-old Caeleb Dressel, who has several chances at gold.

Lucky for you, Downtime is here to get you up to speed on the swimmers and races to look out for when competition starts on Saturday, July 24.

For the first time in decades, three new events have been added to the Olympic swimming lineup. (No, there isn’t a new stroke in the mix.)

Previously, the distance events available every four years were the 1,500m freestyle (also referred to as the mile) for men, and the 800m freestyle for women. And if your reaction is, “Well, that’s some sexist bullshit,” you wouldn’t be alone! Thankfully, Katie Ledecky will rightfully have a shot at an additional gold medal this year in the mile, an event she’s been able to swim at other competitions and has broken the world record in six times. It’s also wonderful that male distance swimmers will get to compete in the 800m, of course.

But the third new event is definitely the most interesting: the 4x100 mixed medley relay. Each country will select two men and two women to compete on the same team. On top of that, since it’s a Medley, each member will swim a different stroke, making for several different permutations of relay teams depending on the strength of individual swimmers and the strategies chosen by coaches.

Do you send both your men out for an early lead? Put in a dominant female breaststroker rather than a middle-of-the-pack male one? FINA, the international swimming governing body, has already implemented the race in World Championships, which occur in the years when the Olympics don’t occur. With lots of lead changes, it’s really fun to watch.

And now for the names to look for.

The Ones You’ve Heard Of

As if you needed a reminder. Remember when she was just a 15-year-old in London, winning her first gold medal by over four seconds? Before she’d swum the 20 fastest women’s 800m freestyle times in history? Or the fastest 10 in the 1500m freestyle?

Well, she found time during a pandemic to graduate from Stanford and grinded (ground?) through a tough training schedule to qualify for her third Olympics. Ledecky will have a busy schedule: in addition to the new 1500m, she’ll swim the 200m, 400m, 800m freestyles, and the 4x200m freestyle relay.

Ledecky also has a new challenge this time around in Australia’s Ariarne Titmus, who is four years Ledecky’s junior and the first real threat to the 400m freestyle world record Ledecky has held since 2014. At Australian Olympic Trials, Titmus swam 3:56.90, coming within a half-second of the record.

SHE IS A FORCE TO BE RECKONED WITH 🙌

‍
Who can say how much Ledecky has thought about Titmus’s performance, but for someone who usually wins by so much that she can’t see other swimmers around, it might be a motivating, even welcome, change.

Although he didn’t compete in any individual events in 2016, you may remember Dressel from the 4x100m freestyle relay on which he won a gold medal with Phelps in Rio.

Since then, he’s added to his sleeve tattoo — extending down from the bald eagle and American flag that sit on his shoulder — and he’s competed in just a couple more international races. Like in 2019, when he won two silver and six gold medals at World Championships, three of them on the same night.

This time around at the Olympics, the American sprinter is poised to be one of the premiere stars, competing in the 50 and 100m freestyle, 100m butterfly, 4x100m freestyle relay, 4x100m men’s medley relay, and likely the 4x100m mixed medley relay.

He’ll face stiff competition in events usually decided by less than a tenth of a second. But Dressel has mastered fundamental details that can make or break a quick race, and his explosive start, fast turns, and powerful underwater kicking can give him an edge.

At Olympic Trials in Omaha, after failing to qualify in the 100m freestyle, Manuel disclosed that she had been diagnosed with Overtraining Syndrome earlier in the season and suffered from fatigue and other symptoms that affected her training.

Three days later, the first black woman to win an Olympic gold medal in swimming pulled off an incredible win in the 50m freestyle, earning a chance to race her other signature event in Tokyo.

Likely for her experience and fortitude, Manuel was named a team captain.

Murphy, who swept the backstroke events in Rio, will also be a team captain. He will again compete in the 100m and 200m backstrokes and attempt to defend, or perhaps break, his world record in the former.

Expect a fun showdown in both against Russia's Evgeny Rylov, who will be competing under “ROC,” meaning Russian Olympic Committee, because of an International Olympic Committee sanction for the country’s doping scandal.

After dominating youth swimming and breaking many of Phelps’ age group records, he became the youngest swimmer to turn professional in 2013 at 14. He’s borne the weight of the attention and pressure that came with that decision ever since — would Michael Andrew live up to the hype?

Now, at 22, he’s made his first Olympic team and is tied with Dressel for a men’s-team-high three individual events. In Tokyo, he’ll compete in the 50m freestyle, 100m breaststroke, 200m Individual Medley, and the 4x100m men’s medley relay.

Andrew is the favorite in the latter, a race in which he’s able to display his unique ability to excel at sprint distances in each of the four strokes.

Outside the pool, he’s facing criticism for his decision to not get vaccinated against COVID-19. Some athletes have already tested positive for COVID-19 in Tokyo.

At just 18 years old, Huske was one of the breakout stars to emerge at this summer’s Olympic Trials. She qualified in the 100m butterfly after breaking the American record in the event in the semi-finals and again in the finals to win the event.

At 55.66, her time in the two-lap sprint event is the fastest in the world so far in 2021, and within striking distance of a world record. With Huske and Dressel, the U.S. has the exciting chance of winning both 100m butterfly events in Tokyo.

In 2019, Smith turned in an outstanding performance at World Championships, winning gold in the 200m backstroke and on the 4x100 women’s medley relay. At just 17, she set world records in both backstroke events. (Since backstroke is the lead-off leg of the medley relay, those swimmers are eligible to break records in the event.)

This year, she qualified for her first Olympic Games. In Tokyo, she’s in store for a tight race against Australia’s Kaylee McKeown, who took down Smith’s 100M Backstroke record by 0.12 seconds in June.

Best of the Rest

This breaststroker from Great Britain is one of three swimmers in Tokyo who are all but sure to win a race. (Ledecky being another.) His is the 100m breaststroke. He is the only person ever to have swum faster than 57 seconds in the event, and he holds 19 of the 20 fastest swims of all time in it.

Like Dressel, he has a patriotic sleeve tattoo, this one reaching down from a giant lion on his left shoulder.

Those still mourning the fact that football went to Rome instead of coming home should look to Peaty’s performance in Tokyo to relieve their sadness.

Remember what I said earlier about the three swimmers? This guy is the third. Hungary’s 21-year-old Kristof Milak shocked the world in 2019 when he broke — or really, demolished — a world record that had been held by Michael Phelps since March 2001. There, Milak swam 1:50.73, taking almost a full second off of Phelps’ 1:51.51. (Listen to commentator Rowdy Gaines at the beginning of the race explain how he’d heard “some chatter” that Milak might break the record and then dismiss it entirely.)

‍
Milak is heavily favored in Tokyo, the only question is could he shock us again by breaking the 1 minute, 50 second barrier?