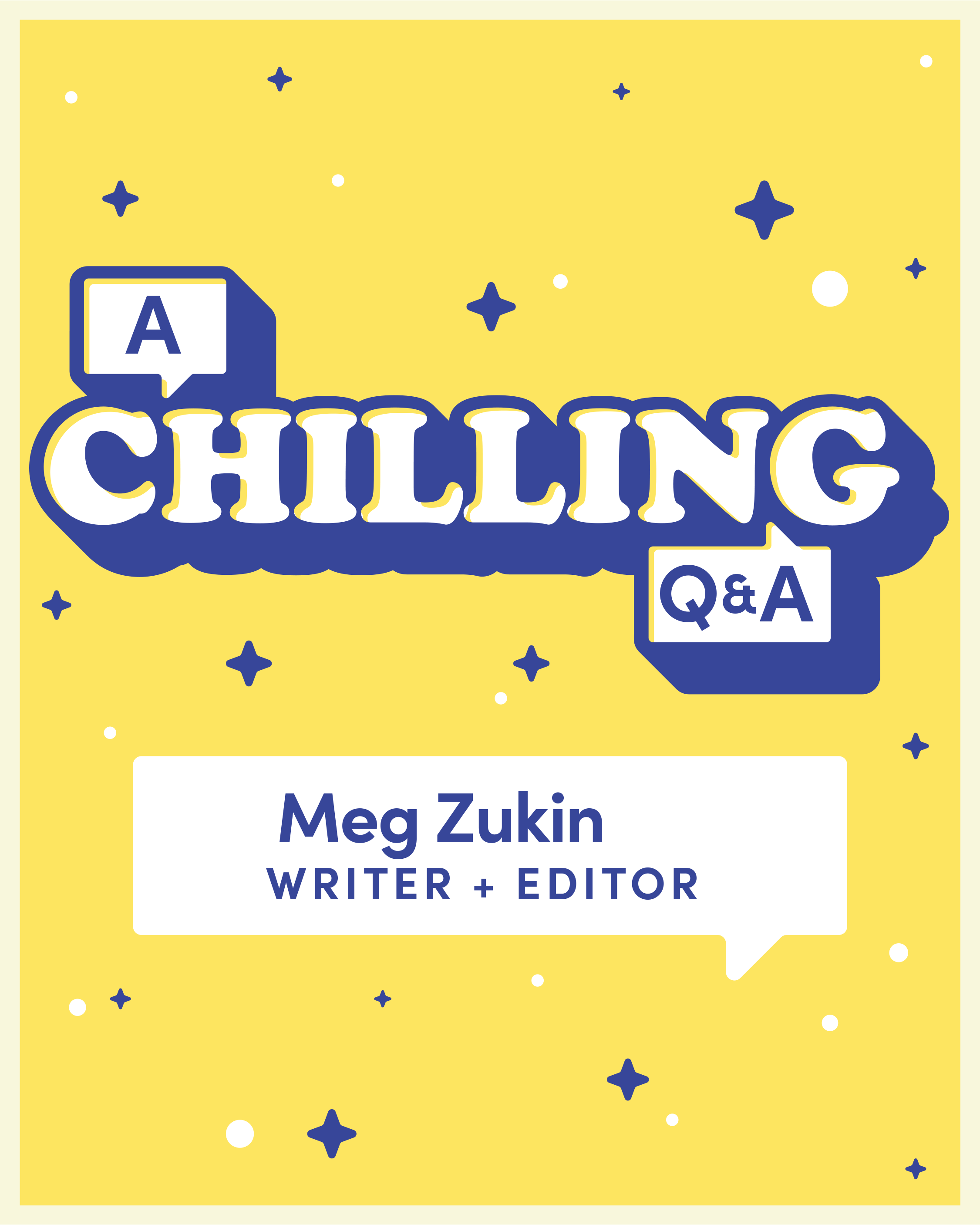 Chilling with one of social media's sharpest storytellers.

Meg Zukin is the engagement editor at CalMatters and the founder of the social distance project.

Whatever my friend Katie makes! I trust her implicitly with all playlists.

I recently binged both seasons of Couples Therapy on Showtime and am now a staunch believer and follower in the powers of Orna Guralnik.

I've lately been watching a lot of famous franchises for the first time: Fast and Furious, the Bourne series, Scream. And even though I do consider myself ride or die family now, the Oscar for best older movie I've picked up recently has to go to The Fifth Element. It's an absolute riot that would never be made in the year of our lord 2021. Who would shell out for costuming by Jean Paul Gaultier today? Not even Lord Bezos himself!

I saw Twilight 10 times in theaters when it first came out and probably twice in quarantine. I cannot (read: will not) say how many times I've viewed it between. She's The Man was a foundational text for me and I've seen Ferris Bueller's Day Off more times than I can count. There was also a period in my life where I put on Lady Gaga's documentary, Five Foot Two, almost every night before bed.

Anything I've ever gotten from Aritzia, plus the night guard I just got from my dentist (who is also my childhood best friend). I've worn it once! Sorry Shannon.

TV remote. Phone. Book maybe, but who am I kidding? I reach for my sheets.

Spotify says Fetch the Bolt Cutters by Fiona Apple and I agree! Olivia Rodrigo is already in a close second though.

‍
What's the best TikTok you've seen in the past year?

I wrote a feature on TikTok last year that led to me losing weeks, if not months, of my life to that app. I feel deep into British TikTok and as of late I'm a ho for any of the ones using the Versailles Run filter. Special mention to Eliza Petersen's famed meteor video, of course. My fyp is a chaos agent, generally speaking.

My PhoneSoap (as seen on Shark Tank) was a life saver in the early days of the pandemic. I also want to shout out my Manduka yoga mat and West Elm desk I found on Facebook Marketplace.

Milk Fed by Melissa Broder, There There by Tommy Orange, and Keith McNally's Instagram post about Graydon Carter.

I've started a lot of hobbies, operative word being started. Among them: knitting, calligraphy, puzzles, Animal Crossing, though I haven't seen my animals in awhile.

In November I became a class traitor and bought a Peloton. I'm on the 3-year payment plan. It was a risk because I never spin and in fact, hate any and all spin classes I've ever been to, but I was desperate! I'm happy to report that I'm almost in the century club (100 rides). I would follow Tunde, Hannah, Ally, and Emma anywhere.

What's the item of clothing (besides Jambys, of course), you've worn most during quarantine?

Sweats. I don't discriminate. I have crappy college sweats, chic Nike sweats, a single pair of luxurious cashmere sweats. Easy pants have been my go-to.

What's your most-frequently made recipe?

I famously don't cook! So toast!

I am not necessarily ashamed, but perhaps a little embarrassed of how many times I've listened to the soundtrack from Shrek 2.

The Americans. I think it is hands-down the best and most flawless show I've ever seen. After I finished it, I just stared at the ceiling and wept.

Lately it's been Maybe You Should Talk to Someone by Lori Gottlieb. I think there are two copies in my apartment and ever since I read it, it has stayed on the top of my rec list. When it comes to fiction, I don't think anything has blown me away like Pachinko by Min Jin Lee, or Homegoing by Yaa Gyasi. I am And, of course, if you're in the market for a celebrity memoir, Jessica Simpson's is that bitch.

Water. I have a Hydroflask but I tend to use a new cup every time and have empty glasses scattered around my entire apartment. I know I'm depressed if I have over three on my bedside table.

What's your average screen time during quarantine? What app have you used the most, and why?

8 hours. I work in social media and engagement, so I blame it on my job, but for a thick period of quarantine I was chemically addicted to TikTok. I'm trying to ween myself off the app, but it's so easy to get sucked into.

Reddit scares me but I have occasionally looked at the plant discussions. I'm currently trying to revive my monstera and it's not looking good.

Samantha Jones with a healthy dose of Little Monster and a dash of Daria.

I thought, "Soffe shorts, but make it fashion." Needless to say, I love them.

I would love to see Jambys adorned with strawberries so they can match my Crocs.