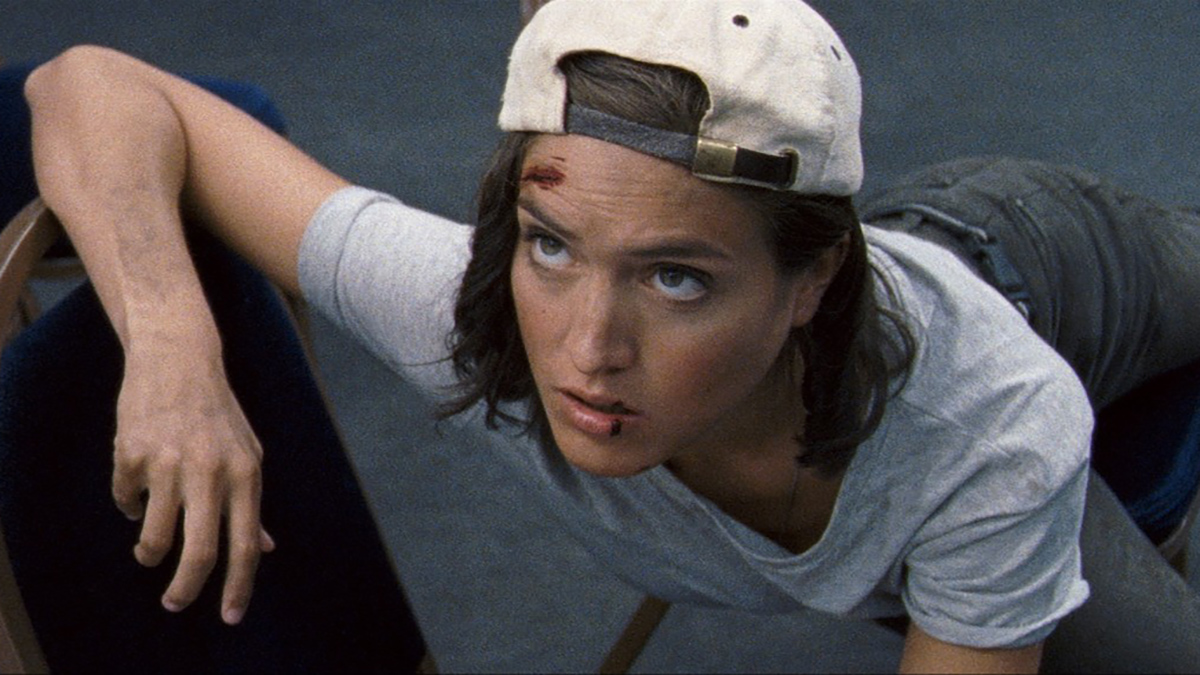 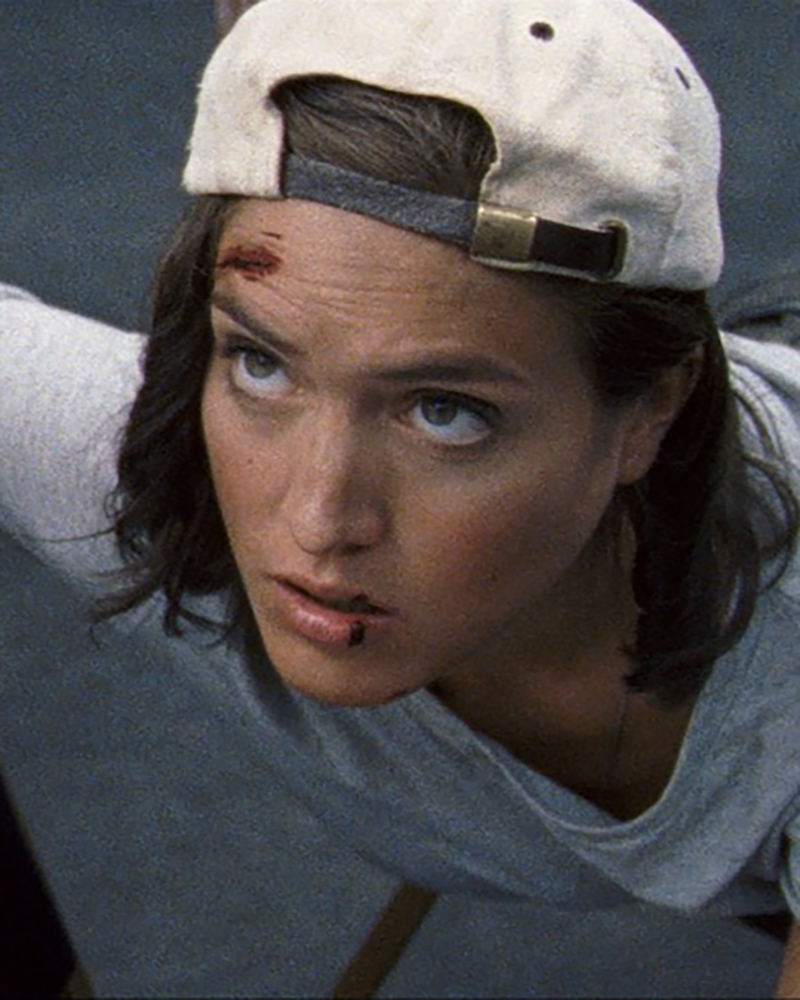 This German supernatural horror film employs an outré sound design to convey the experience of hypnosis.

Our father, why art thou such a dick?” asks Luz (Luana Velis) in Tilman Singer’s 2018 horror film by the same name. Having wandered into a police station in the middle of the night, the dazed and roughed up Luz can only repeat her blasphemous prayer, much to the confusion of local authorities. The two officers, Olarte (Johannes Benecke) and Bertillon (Nadja Stübiger), reach out to a local psychiatrist, Dr. Rossini (Jan Bluthardt), who attempts to figure out what really haunts Luz.

Horror films can do a lot with very little: consider the current viral hit Skinamarink whose single location, 15K budget, and experimental structure have managed to tap into people’s childhood fears more effectively than a larger studio feature. Similarly, Tilman’s 16mm graduate thesis compels because of its sound design, which borders on performance art. With the exception of a seduction scene set at a bar, Luz consists of a single interrogation scene, but rather than the expected back-and-forth between interrogator and subject, Tilman opens up one’s woman psyche to the point where it changes the world around her.

Luz, who speaks only Spanish, sits in a large conference room where Olarte, who’s in an adjacent soundbooth, records and translates her words to German. It’s unclear when the film takes place—the station is wood paneled and fluorescently lit, and Olarte uses reel-to-reel technology. In an interview with Diabolique, Tillman discusses how he deliberately mixed eras with his sets: “There’s sixties architecture, and then there’s seventies interior design, and then there’s eighties/nineties clothing and technology.” Even what gets translated is out of sync, for only when Olarte provides the German translation do we understand Luz’s speech. Her Spanish remains deliberately unsubtitled.

At the front of the conference room, Rossini has set up a makeshift taxi for Luz to sit in, i.e., four chairs grouped together with a rearview mirror. He hypnotizes her, shifting from the catatonic repetition of her prayer to a new trance returning her to the time before her accident. Rossini guides Luz, asking her to remember the sounds of a taxi: we hear the metallic airport announcements, the hum of cars and rain, all of which creates a new imaginary space despite the four characters still sitting in the fluorescently lit conference room. A hypnotized Luz thinks and acts as if she is back in her taxi, oblivious to the space of the conference room and the officers. But rather than just have the audience watch a woman be hypnotized, Tilman instead situates us within Luz’s perspective—we experience the trance with her, hearing what she hears.

But Rossini’s unorthodox methods can’t be trusted. Before he arrives at the station, he meets Nora Vanderkurt (Julia Riedler) in a bar, and she tells him a story about an old friend of hers from boarding school who summoned a demon. Nora is not only an old friend of Luz’s, but was responsible for the earlier accident that they’re trying to solve. It’s clear that Nora isn’t really Nora, and whoever controls her spirit has now hitched a ride with Rossini. As a demonic doctor guides Luz through hypnosis, we discover that she has buried other incidents besides her car accident. Tillman collapses the line between possession and hypnosis, with the director layering moments on top of each other to keep Luz’s perspective as tight as possible. A chance encounter with an old friend from Catholic school, a complaint about a man having a fit on the plane, all of it goes back to Luz’s adolescence.

As the film progresses, the experiences from Luz’s past leaks from her psyche into the conference room, and by extension the rest of the world. What the audience experienced as Luz’s flashbacks now begins to shape the conference room, and her possession becomes our possession. Tilman’s remarkable sound design helps shift the film between Luz’s memories and the contemporary space she occupies, and Simon Waskow’s kinetic score eliminates the divide between her memories and the physical realm. There’s little interest in verisimilitude here; the film always draws attention to how it is made. Through Rossini’s hypnosis, we see the construction of both filmic and psychic worlds, but as a conference room filled with fog becomes a plane and a doctor becomes a demon, we also see the deconstruction of our reality.

Hypnosis has had therapeutic uses for centuries. Contemporary application stems directly from Charcot and Freud, and has also developed into various mental health treatments like EMDR. Forensic hypnosis was also often used in criminal investigations, though its efficiency and ethical concerns meant its use faded in the early 1990s. At the turn of the century, spiritualists would use mesmerism to speak with spirits. It’s at this intersection that Luz exists at the crucial intersection between the supernatural and the psyche. Within all of us lies a place that renders us exposed to trauma, even to demonic forces. Our memories can be manipulated and  our actions influenced by a sinister outsider, all of which can be built and edited like a film.

The idea that the supernatural acts as an externalized metaphor for our own inner turmoil is well tread ground, but Tilman instead uses this trope to play with sound and image. Under hypnosis, Luz can access her past, but she remains vulnerable, never fully in control or aware of what’s happening. Tilman’s decision to center sound as the film’s primary sensorial experience not only elevates Luz above most bland horror films, but it also asks an even more unnerving question: Can we really trust what we remember?

Luz is available to stream for free on Tubi, Vudu, Crackle, and Plex.

Madeleine Wall is a programmer for Indie Memphis. She has also written for Cinema Scope, Sight & Sound, and MUBI's Notebook. She is very easily hypnotized.