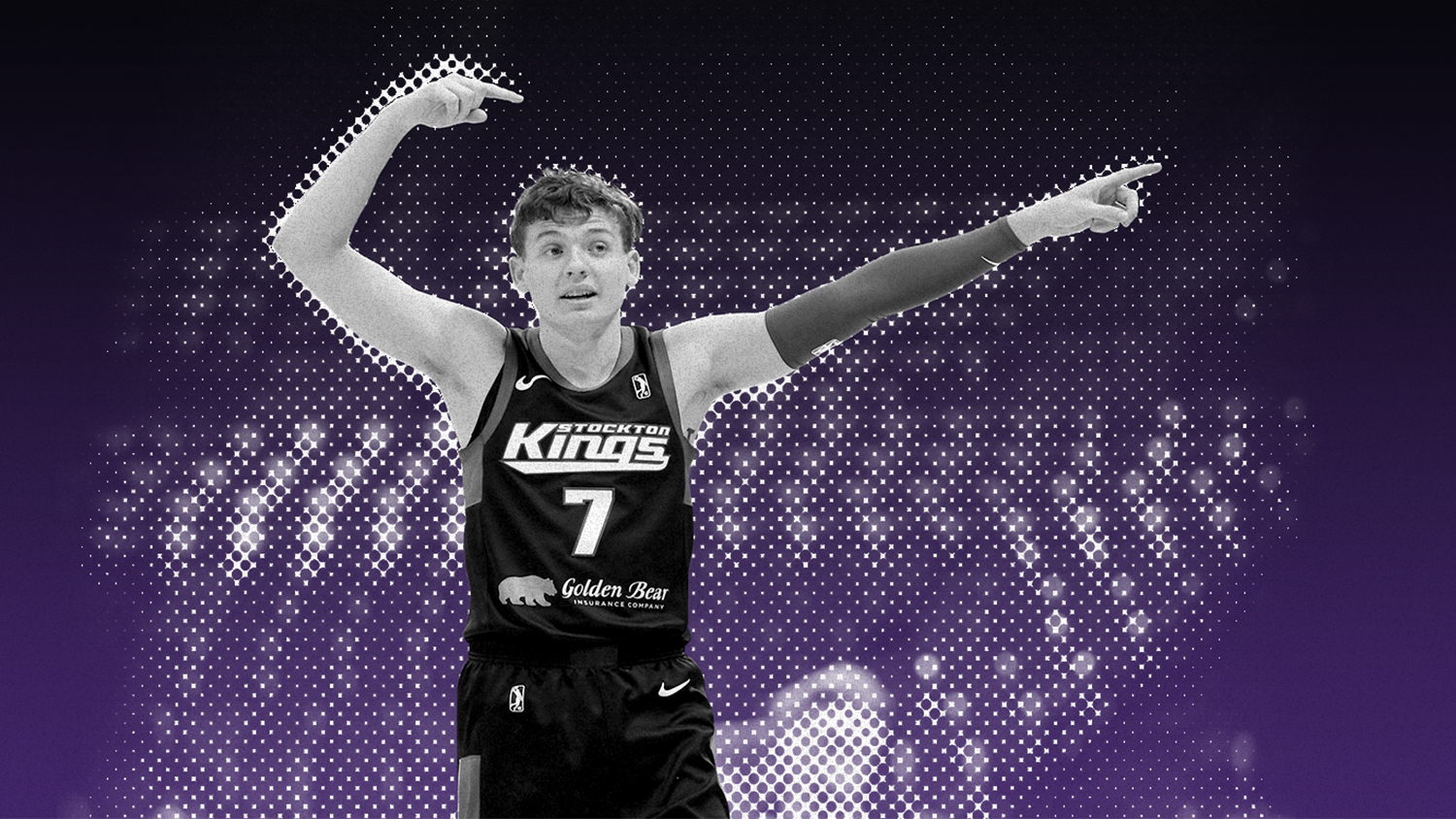 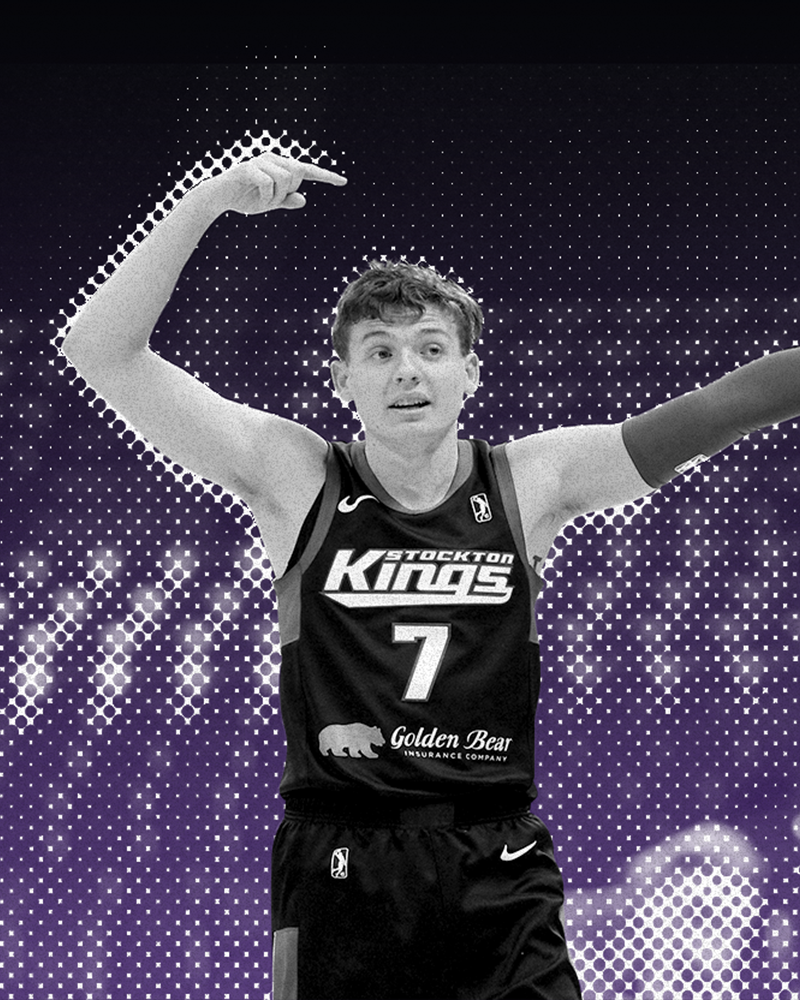 yle Guy is one of the easiest players to root for in the entire NBA. The 55th pick in the 2019 NBA Draft after starring at Virginia—they won the 2019 national title thanks to Kyle's late game heroics in the tournament—Guy has worked for every second of burn he's earned in the league.That means a lot of shuttles between Sacramento and Stockton, where the team's G-League affiliate is based, and a lot of late nights in the gym. But you wouldn't know about that professional pressure from talking to him, because Guy is as laid back as it gets. This guy knows how to chill!

Recently, we caught up with Kyle on an off day in Sacramento, in a season where he's made big strides as a player and gotten more and more time with the main club. A movie buff who loves a sitcom, we talked about his go-tos and how life has changed since he learned his wife, Alexa, was pregnant.

What's the biggest thing that's changed about your routine since you guys got pregnant?

I already was an avid reader, but now I'm reading more books about pregnancy and articles about nurture, things like that. I’ve also noticed that my bank account is starting to dwindle, to strollers and car seats and clothes even though the boy isn’t due until September. But you know other than that, the routine's been pretty similar to what it was before.

When you buy baby stuff, do you have a process for that? Do you shop online or go to physical stores?

I got this process called “my wife pretty much does it all.” During All-Star break, we went to Monterey Bay, an area south of San Fran. That’s where we bought the first outfit for himbut it w—I got him a jumpsuit and she got him a nighttime onesie. Our parents are just sending us an insane amount of stuff. And I'm like, “He is going to grow out of this three weeks.” But whatever.

Is there anything you found streaming recently that you really liked?

I just watch Godzilla vs Kong. It was better than expected. The King Kong movie with Jack Black … Skull Island, that's the best one. I’m introducing my teammate Robert Woodard to Game of Thrones, so I’m re-watching that. He loves it. We’re halfway through season 2 and we started a week ago.

What's the movie you've watched most?

What a fantastic question.

Doesn’t have to be your favorite. Just most-watched.

Well, I’m going to answer that question anyways. My favorite movie of all time is Interstellar. I’ve probably seen that three or four times because it’s so long. Inception is number two on my list, but I've seen that probably 15 times.

Okay, most-watched… I know it’s newer, Moana’s up there. Warrior with Tom Hardy and Joel Edgerton. That's one of my favorite movies, super underrated. I just watched Lone Survivor last night on the plane home or probably the 20th time. Those are some of my go-tos…

What's a purchase you made just any time in your life that you thought was really going to change your life, but did not?

Do the Kings have like an activity you guys all do together. When you have downtime, do you go to dinner? Do you play games?

When I was with the G League team, we had game nights a lot. We're playing board and card games. We're playing anything from Euchre, spades, Booray to Catan, Monopoly, Life. I will claim that I am the best Catan player who ever lived.

What is your most played song during quarantine?

I've been listening to Russ and Rod Wave. What’s the song [sings] “Why you always in a mood?”

That one right there… I have listened to it a lot.

What’s your go-to delivery or dinner spot during quarantine?

I got a big thing for Five Guys. I don't know if it's because I want them to sponsor me or what. But Five Guys for sure. When I first moved out here, I wasn't getting paid, so I would go to Little Caesars. Oh my God. That was every single day. Hot and Ready… five bucks! We cook a lot more now, my wife cooks.

What’s your favorite thing she cooks?

She makes this lemon pepper chicken with olive oil on the broccoli, which is just delightful. Amazing. My grandmother has her own cookbook and I've been trying to master some of her desserts because she's so good at them. So I've been making a homemade sweet tea and Oreo dirt pudding lately.

What’s your go-to workout routine at home when you can’t get to the facility?

Me and my buddies on the G League team, Isaiah Piñeiro and Marcus Graves, we were taking our dogs to this empty soccer field and playing one-on-one on one football. I even bought football cleats for it. So like, if you throw a touchdown, it's a one point. If you catch a touchdown it’s two points, if you're getting interceptions it’s three points. That type of thing.

What’s your screen time looking like these days, compared to pre-quarantine?

Probably little bit higher, obviously. Just cause you can't go do normal activities. I really enjoy entertainment, the film industry. So I was already really high on screen time because of that.

Which TV show or movie would you go back and watch for the first time, if you could?

Game of Thrones that's the best television show of all time, in my opinion. So being able to see that for the first time… that would be my answer.

What show would you recommend to someone that just re-watches episodes of “The Office?”

I think Parks and Rec is better than The Office. I’m a big sitcom guy. So I like New Girl and Parks and Rec. I’m super big into documentaries as well. My favorite of all time is the Andre the Giant HBO doc.  Or Momentum Generation … it’s on HBO and Amazon prime. It’s about Kelly Slater, Rob Machado, all these guys that made surfing cool. It’s one of my favorites.

What item of clothing did you wear the most in quarantine?

Probably just hats because I was growing my hair out in quarantine and it was looking rough. So I was trying to hide it while also grow it out. I’d go hats or my house slippers, which I took from a hotel.