The Downtime Guide to: Playing Handball 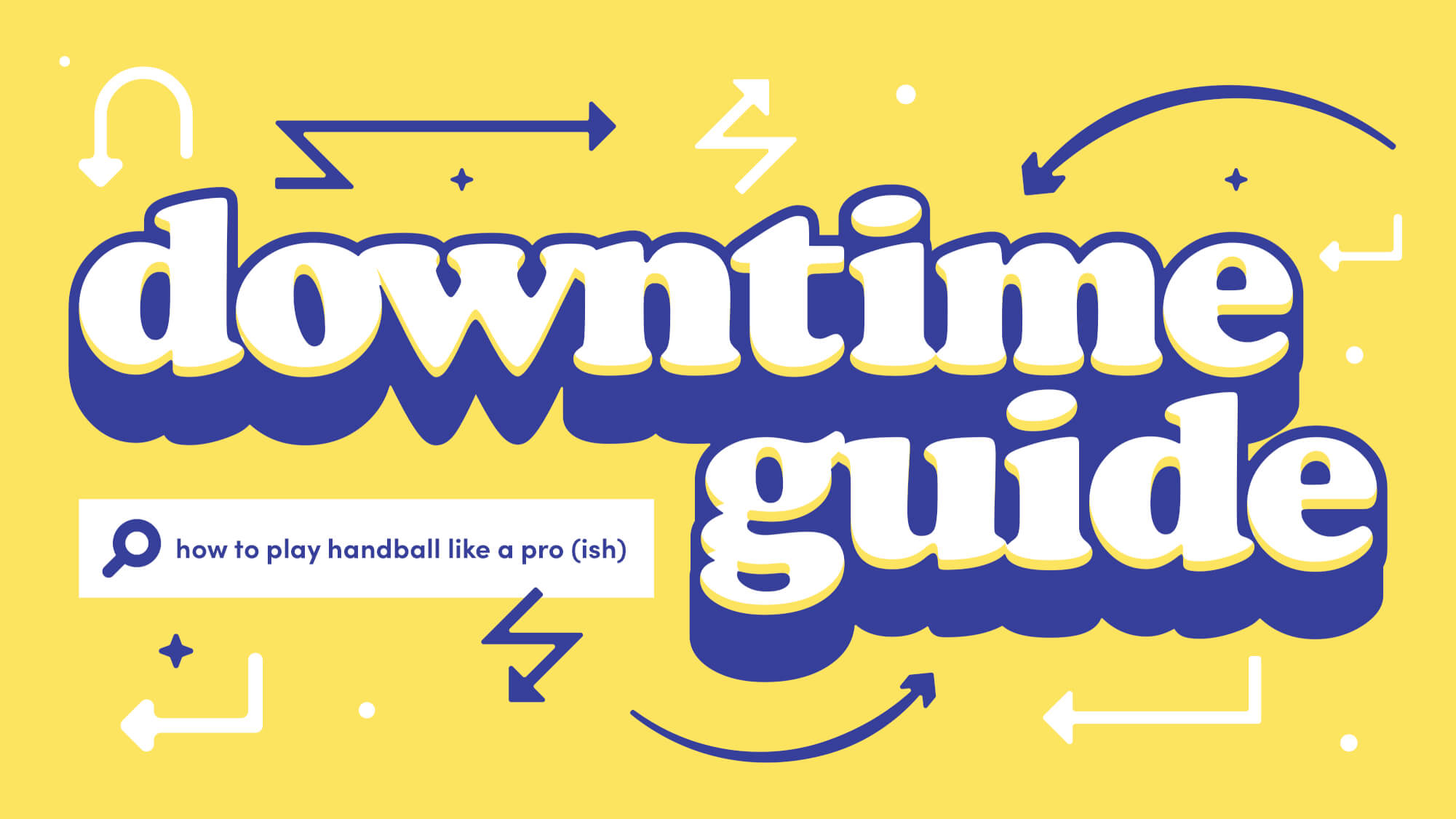 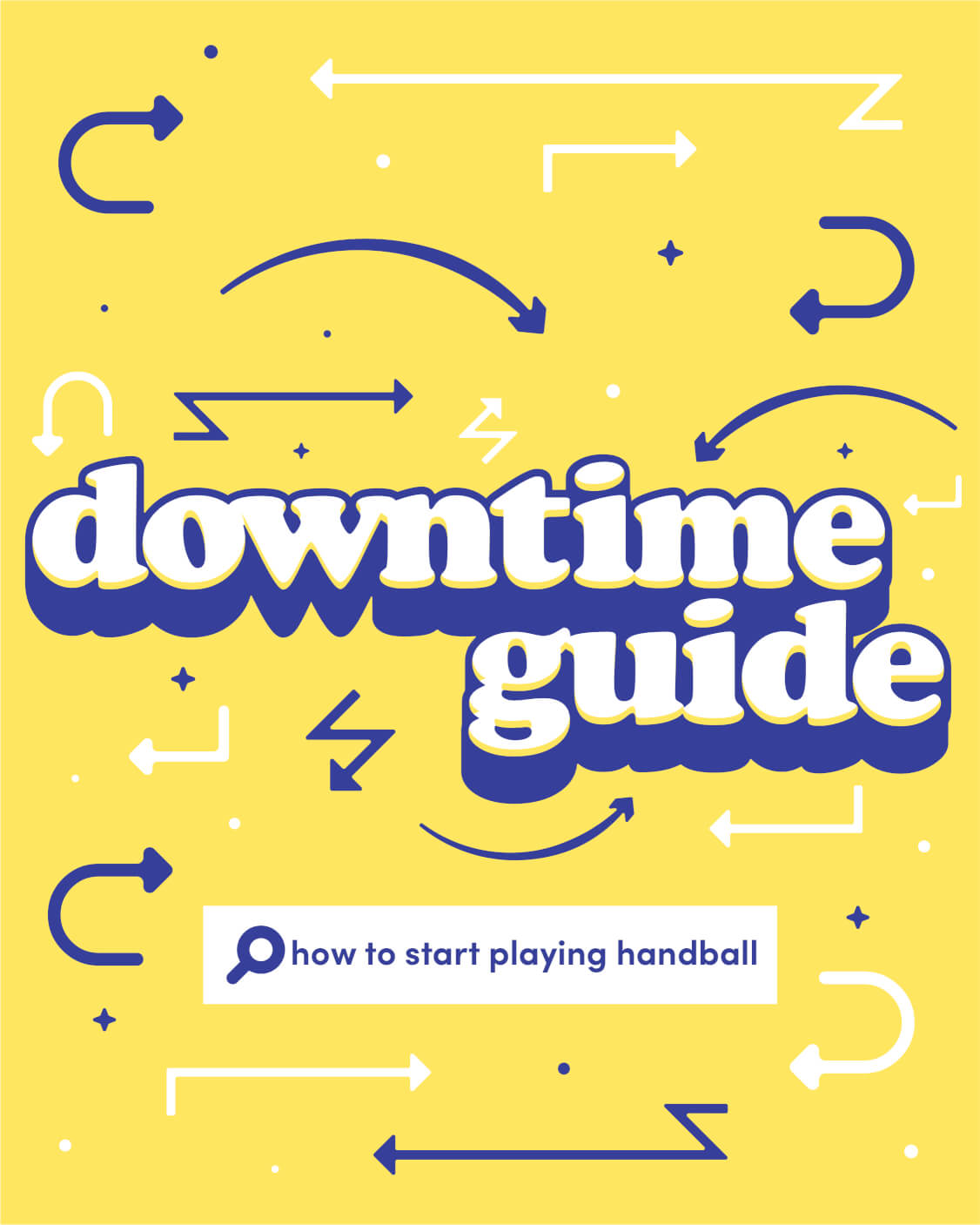 t was June, the pandemic was sweeping through New York, and the separation between my job and personal life had become nonexistent. The only mental break I was able to find was through binging Arnold Schwarznegger’s filmography, which I breezed through in about a week (My top three, in case you were wondering: 1) The Terminator 2) Total Recall 3) Commando). I wasn’t sure how I would go on; I tried to pick up a couple of hobbies to pass the time: Bike riding was expensive, running was monotonous, and dribbling a basketball was pointless as New York City’s parks were still without rims for safety reasons. I was ready to mail it in; maybe I was destined to forever sit in my room on Slack with no escape. That was until, out of boredom, I did a complete bedroom clean-out and found my ocean blue Sky Bounce rubber handball from high school.

At my New York City public high school, the local handball courts were the getaway. It was the after-school spot where we passed the time until everyone eventually had to go home, and at least there were little to no cops around to give us shit. Usually buried behind a park’s basketball courts and far removed from the playgrounds, handball courts were where anything went—fights, makeouts, and the smell of weed were all inescapable. Essentially, one wall handball courts are outdoors—a few indoor ones exist like the Zerega handball courts in the Bronx—which means they are an open space for kids to hangout. Eventually, you work up the courage to step onto the court for a match. When I did, I became possessed by the game: Multiple times a week, I would come home from the courts with callouses on my hands, smelling as if I went for a swim in the Hudson river, and able to squeeze the sweat out of my t-shirt like a towel that fell in a pool.

Handball was brought to New York City by immigrants in the 1800s. It was popularized during the early 20th century in Coney Island, partially for the game’s ease of access: A way to be active without having any money since all you needed was a wall and a rubber ball. (Today, major tournaments are still held in Coney Island, though there are now over 2,000 courts throughout the five boroughs.)

Like all the best things in New York, handball is straightforward. With a few structural similarities to racquetball and tennis, handball can be played by two, three, or four players. In the more popular, two-player game, the server stands at the service line closer to the wall, and the opponent toward the back. The idea is to use the palm of your hand to have a rally, and you must serve or return the ball until the opposition either hits the ball out of bounds or they’re unable to hit the wall—only the server can score a point. If the non-serving player wins the rally, they earn their serve. It’s a competitive game, usually played to 15, 21, or, 25, and by the end your palms will be swollen (gloves are used by some), and you’ll be sweating profusely like Bruce Willis at the end of Die Hard.

My mid-quarantine discovery of my old handball led to a rush of memories, and I quickly tried to recall where the closest handball court was. You see, handball courts take up a surprising amount of space in the city, but you never quite notice them unless you’re seeking them out. I hopped on my bike and cruised over to Mahoney Playground in Staten Island’s New Brighton neighborhood and rallied with myself against the wall until my hand was numb. Later I texted two of my high-school friends, who I hadn’t seen since the pandemic was declared in March, and suggested that we reunite to play handball. Two days later, we were masked at the Battery Park handball court, panting and hitting the ball everywhere but the wall.

Over the next several weeks, I spent nearly all of my downtime re-acclimating myself with the sport. I played with anyone who would give me the time of the day, reconnecting with friends I hadn’t seen in years in the process. Whenever I played, I would watch the games happening on other courts, and immediately I would pick up something new through imitation. Initially, I was playing for safe and consistent rallies; then, I began to hit shots for power. Ultimately, though, my goal is to be able to angle my shots and control a game by holding my position in the center of the court.

At home, I would log onto YouTube and watch any handball-related content I could find: An episode of Blake Griffin’s Red Bull web series with Timbo Gonzalez, a modern day New York City handball icon; a Red Bull mini-episode of Urban Recreation on the sport; an interview with handball legend Rookie. A pair of Timbo’s singles matches from 2019 had me mesmerized, his Big Blue Ballers 2019 final and his King of the Court 2019 semi-final, both against Tywan. After watching both matches consecutively, I spent four hours the following day on the court playing matches through the rain and until sundown.

Yet there’s no better way to immerse myself in New York City’s handball culture than to stroll over to Manhattan’s West 4th Street Courts. It’s the Madison Square Garden of handball, where the best players from across the globe come to prove themselves. Some days, I make my way over and spectate through the fence: the angles, the power, the control—it’s a level of play you have to see to believe.

A couple of Saturdays ago, on my way to West 4th, I stopped at a less popular court in Manhattan’s East Village and had my head on a swivel watching a tense game of doubles. Along the fence, a crew of older men watched on: The drinks were out, the smell of cigarettes was in the air, and the trivial arguments were on the verge of breaking out. It brought me back to watching handball games at the court in high school, a place where nobody seemed to be thinking about their responsibilities, just attempting to escape, and maybe work up the courage to step on the court themselves.