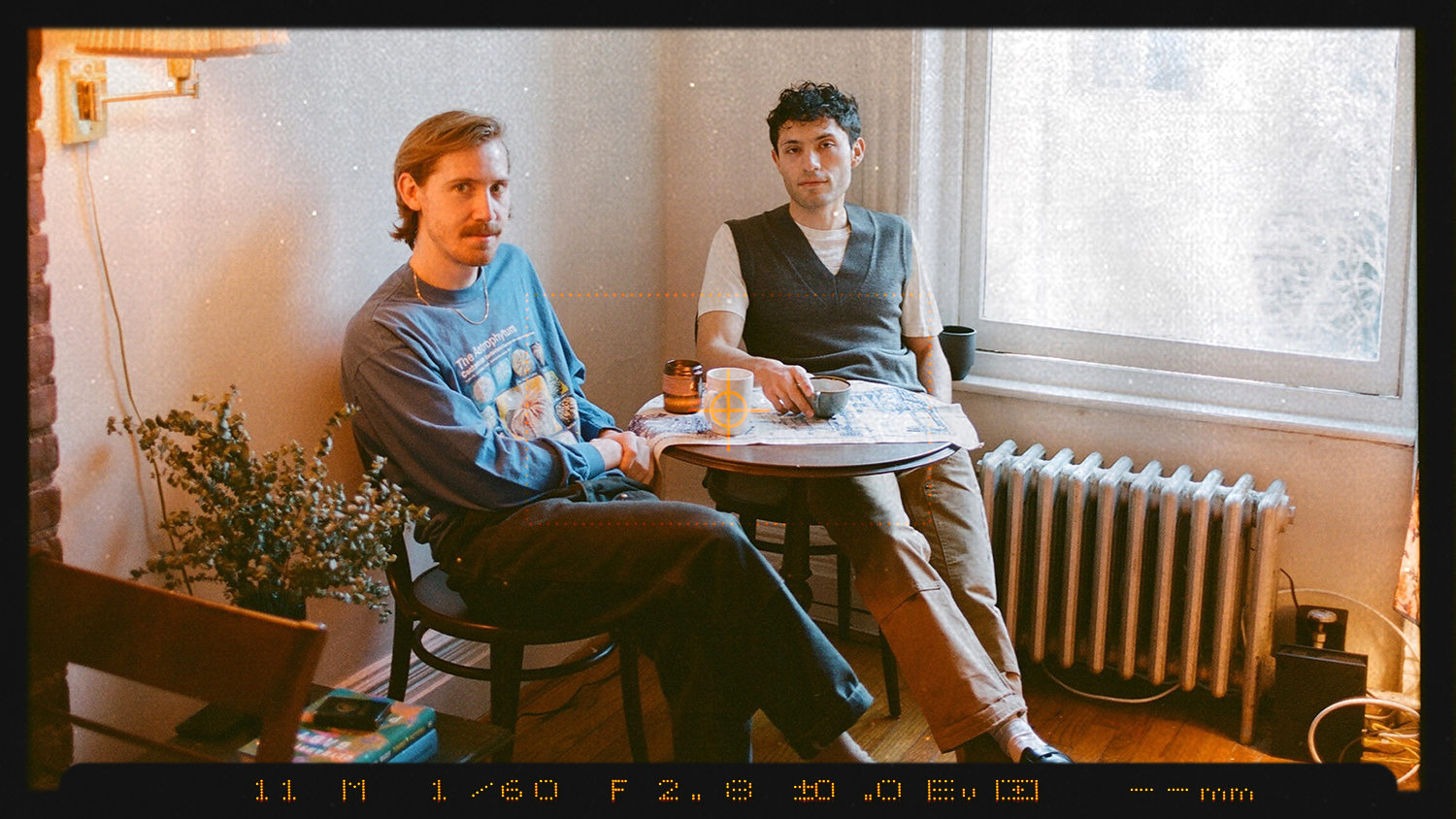 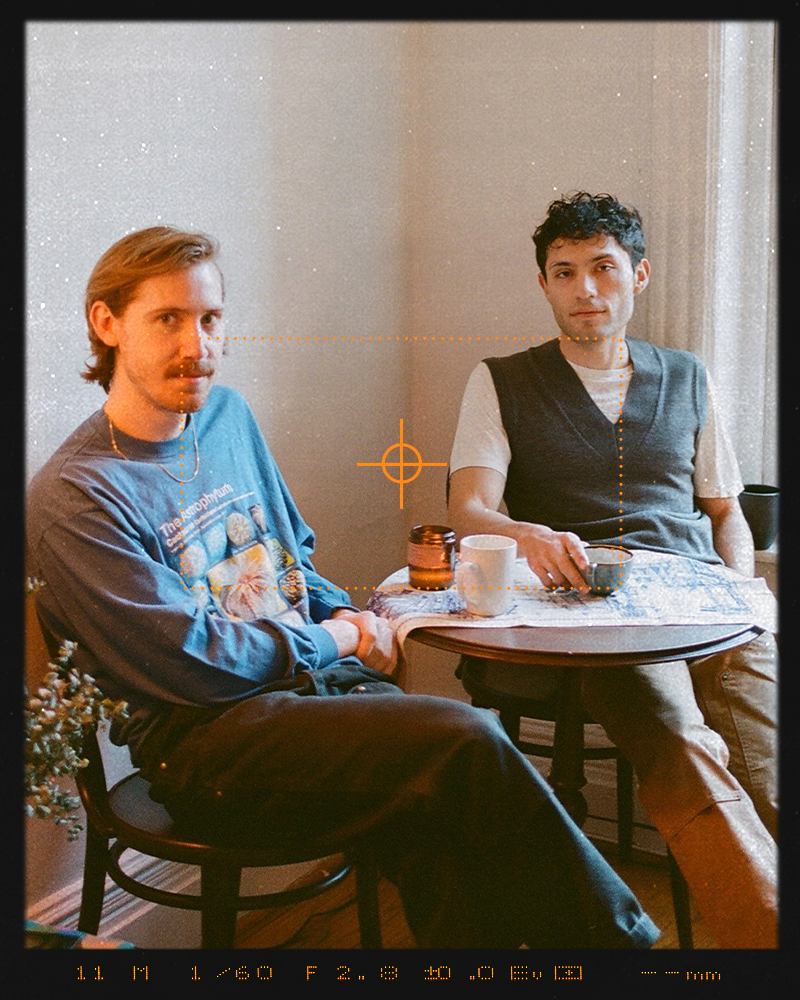 Emilio Quezada and Evan Shinn have carved out a magical universe for male skintellectuals.

f the men in your life are still taking Dove Men 3-in-1 straight to the face on a weekly basis, it may be time for a dermatology intervention. Wild habits or not, it’s not necessarily their fault— the world of “skincare for men” has always been bleak, a macho land of ball wipes and unfortunate branding. Luckily, the Dewy Dudes are here with an easier, softer way to give that dehydrated dermis the ultimate glow-up.

The dudes, Emilio Quezada and Evan Shinn are just a couple of fellas from Kansas who have carved out a magical universe for male skintellectuals. What started as an unhinged meme IG account quickly grew into a podcast featuring interviews with everyone from dermatology legend Dr. Loretta to JamFam's own Hunter Harris. Everything they do is somehow darkly self-deprecating and charmingly earnest at the same time.

We caught up with Evan and Emilio at their respective NYC apartments to see how they’ve been taking care of themselves when they’re not running a skincare psyop.

What's the one thing you're always recommending to someone who's a newcomer to the world of skincare?

Evan: I feel like it's always changing because we’ll receive something that I’ll start really liking. But right now I'm really into the Dr. Loretta Urban Antioxidant SPF and her Tightening Eye Gel. I’m also always recommending the iS Clinical Cleansing Complex and the Environ Vitamin Step-Up System. It’s like a five-step system to introduce vitamin A into your moisturizing regimen to get your skin used to it so you can work up to stronger retinoids and maybe one day do tretinoin if you want.

Emilio: So I just started using this for the first time—we had always talked about it and might include it in memes, but I had never actually used it, but P50, the 1970 formula. Now I recommend that to everybody. And then this brand, Muri Lelu, sent us their Indica Oil. It kind of smells like weed, but I just put it on at night and I don't know what it does, but it leaves my skin so soft and then in the morning there’s a brightening effect.

Do you have any drugstore faves for those who may not be on that Dermstore budget?

Emilio: CeraVe PM Facial Moisturizing Lotion. It’s like sixteen bucks. That’s something we both at times still use.

Evan: Not at the drugstore, but at the hardware store, I'm picking up Working Hands, (subtle plug for our interview with Ryan Hemsworth). It’s so thick.

Are there any skin habits you’ve picked up over the last year, good or bad?

Evan: I don't really use toner anymore. I think that's like more of a psychological thing. Because if I can take out one step, I'm more likely to do my routine. It seemed like a whole entire event before.

Emilio: I guess it's something I've always done, but in the last year I've tried to be really consistent with it, and that’s taking more care of my body. So now I don't miss a day of putting on body lotion after I shower instead of just taking care of my face. Right now, honestly, I’m just using some stuff I bought at Whole Foods, but the Necessaire stuff is also good.

Outside of the skin space, what's a purchase you thought would change your life, but absolutely did not?

Evan: I bought a Breville juicer. That was fucking dumb. It’s just too hard to clean.

Emilio: Everything I've bought recently has actually changed my life. Like a Marshall speaker. For whatever reason, it makes me want to listen to music more. I had a Sonos before and it's great, sounds amazing, probably better than the Marshall one. Maybe it's just like the look of it and the whole wireless Bluetooth thing, but yeah, that changed my life.

You have two hours to kill at home. What are you doing?

Evan: I'm picking up my phone and I'm scrolling. Everyone who says they pick up a book and they read it, they're lying. They pick up their phone, they text their friends, or they start going down some rabbit hole as cope, that's what they do.

Emilio: Yeah, I think I’m on my phone too, but I open up that Coinbase Pro app and I study the charts, baby, and I see how we can make some coin.

Wow, thank you. So you’re not reading the books, but if you are recommending a book, what is it?

Emilio: It's called Boom: Mad Money, Mega Dealers, and the Rise of Contemporary Art, and it kind of goes through the history of contemporary art and galleries in New York and how the prices skyrocketed due to these dealers pushing them up. It's kind of long, but such a quick and easy read.

Evan: I’m finishing Fake Accounts and then onto No One is Talking About This. But no recs —I feel like I don't want to push an agenda on anyone.‍

What’s your most worn item of clothing over the last year?

Emilio: Being locked inside for so long, Birks. And now that the weather's getting nice again, Birks again.

Evan: I have these Uniqlo socks that I wear. Not like the exact same pair, but I have like 10 pairs of these particular darker beige socks.

What's the state of the union when it comes to fitness?

Evan: I recently got a gym membership. I haven't been to the gym yet, but I run. I also bought some dumbbells. I watch MadFit and I do her workouts or I do the calisthenics outside.

Emilio: Now that it's nice out, I'm biking every day again, and I'm biking as if I’m on the Tour de France, trying to race cars. It's crazy how good of a workout that is. But I'm also going to the calisthenics equipment at McCarren Park, and just doing pull-ups and other basic things.

What’s the most surprising or embarrassing thing on your YouTube explore page?

Emilio: My explore page is all videos of the Winklevoss twins right now. You know, TechCrunch talks because I search Bitcoin like once a week and now it's just all that.

Evan: Mine’s a mix of like, MadFit then an Adam Curtis documentary or something, and then Justin Bieber Tiny Desk, which I never personally watched, but when people come over, they say “let's watch YouTube...”
‍

Emilio: Oh, that’s what they say?

Incredible. Are you chronic TV rewatchers? What are you streaming lately?

Evan: I always have something on in the background. It could be anything from Sex and the City to Gilmore Girls to Mad Men, The Sopranos, Eastbound and Down, Fleabag. I’ve rewatched Game of Thrones, Succession. I just power through it, I’m passively watching.

Emilio: I used to rewatch Gossip Girl every winter and I didn't rewatch it this winter and I feel like my seasonal depression was pretty bad. And I'm wondering if it was because I didn't rewatch Gossip Girl. But no, I usually don't rewatch. My sister recommended this thing to me called Mubi, though. It’s a subscription service that essentially just picks a movie for you because I feel like people that rewatch a lot, the issue is that they just can't make a decision on what to watch. So that’s been nice; I've watched more movies through that.

What do you drink when you're at home the most often?

Emilio: I recently became sort of a water aficionado, I guess. And I'm always buying Mountain Valley Spring Water. I just feel like it hydrates me better. So it's either that or bodega coffee or Peronis in the evening. My Holy Trinity.

Evan: I usually make coffee. I drink a lot of coffee. I do a Chemex, but I don’t know the rules.

Evan: I'll tell you this. If you're 27 and you're listening to music, you're a baby. Get yourself a podcast. Enough with that child's play. But my most embarrassing Spotify playlists are the playlists of ex-crushes and ex-lovers. I'll just go to their profile and put that on. Not to remember them, but because people are over and I'm not really good at curating stuff, but my crushes seem to be.

Emilio: Interesting. I don't know if there's a playlist, but mine’s Selena Gomez' Rare. I hit that private session and just let it go from first track to last.