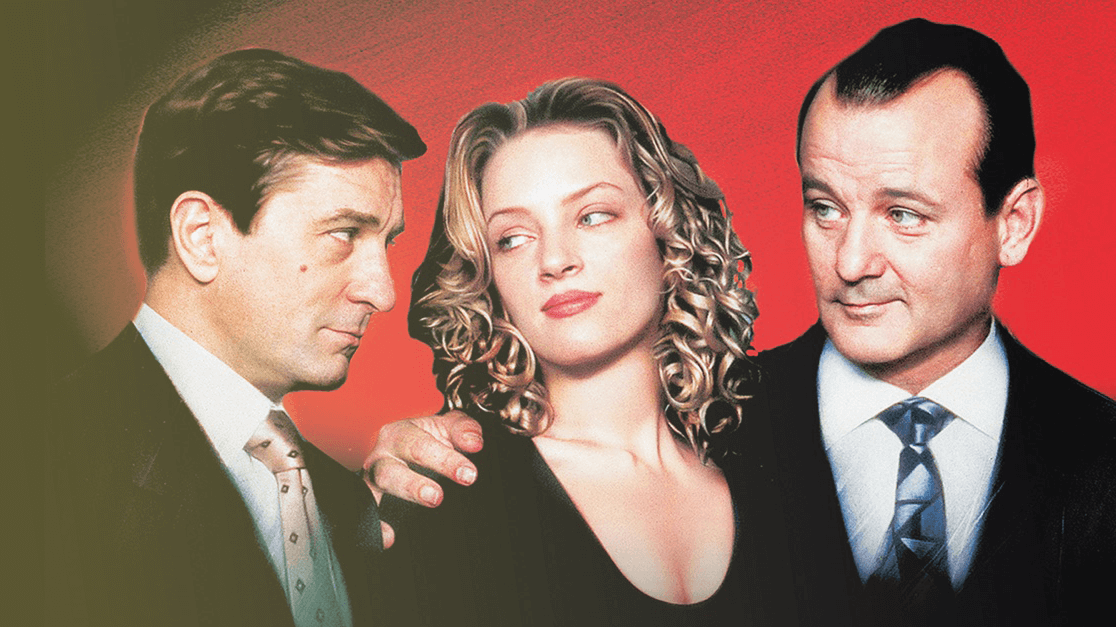 While the crime dramedy's premise may be commercial, its execution is anything but.

ne’s a cop. One’s a gangster. One’s a bartender.

Except it’s not that simple. The cop is a crime scene photographer with tangled, complicated artistic impulses. The gangster does stand-up at the club he owns, but only gets laughs from his Cosa Nostra buddies. The bartender... Well, she’s in serious debt to the gangster. So serious that he says he owns her.

The cop is Wayne “Mad Dog” Dobie, played by Robert De Niro. Bill Murray plays the gangster, Frank Milo. And Uma Thurman rounds out the cast as Glory, the bartender. The film, somewhere between a comedy and a drama, is Mad Dog and Glory (1993).

Robert De Niro in a comedy? Bill Murray in a drama? That’s dog bites man in 2022. In 1993, however, it was considered casting against type, despite De Niro and Murray’s occasional respective cross-genre forays such as Midnight Run (1988) and The Razor’s Edge (1984). Meets the Parents (2000) and Rushmore (1998) were still years away.

‍Mad Dog and Glory has a high-concept, of-its-time pitch: a milquetoast cop saves a gangster’s life, and the gangster repays him with a much younger woman as houseguest for a week. As Andy Dougan notes in Untouchable: Robert De Niro Unauthorized (2011), Pretty Woman (1990), Honeymoon in Vegas (1992), and Indecent Proposal (1993) are all structured around similar hooks.

While Mad Dog’s pitch may be commercial, its execution is anything but. The film is a tone piece, one established by screenwriter Richard Price and executed by director John McNaughton. The inciting incident, Wayne entering a bodega mid-stick-up and saving Frank’s life, may be incited by a coworker’s request for a Twinkie, but it isn’t played even remotely for laughs. Wayne talks the hold-up man down, convincing him to flee with the money, in a diametrically opposite way from how Travis Bickle handles a similar situation in Taxi Driver (1976). For his part, Frank mocks Wayne for being reasonable, then exits, pissy as hell. It’s not till Frank talks to his therapist that he realizes he was “just resorting to macho bullshit like [he’s] programmed to” and that he owes Wayne.

When Wayne and Frank meet for the second time, getting cognac drunk, they develop the back and forth of people surprised to find they understand each other. The dialogue is intricate, but it isn’t David Mametian fencing. It’s two outsiders slowly relaxing their guards.

‍Mad Dog’s rhythm follows in this mode. Scenes play out a beat or two longer than strict screenwriterly craft would dictate. Every character is given room to breathe. A cast of ringers—including Mike Starr’s gangster who only drinks Chivas and milk, and Wayne’s “very sarcastic” partner David Caruso (hot shit that year with the premiere of ABC’s police procedural NYPD Blue)—run game on Price’s typically precise dialogue.

Price’s career has been a strange, disjointed thing. At 25, he hit big with his first novel The Wanderers (1974), a riotous gangland cook’s tour set in his native Bronx. After a series of similarly working-class, crime-related NYC-adjacent novels, Price spent much of the ’80s writing screenplays, two of which became Martin Scorsese’s The Color of Money (1986) and notable Al Pacino come-back Sea of Love (1989). It’s traditional to view Price’s first period in Hollywood as an exile in commercial hell, but recent interviews suggest a more nuanced reality: “My first four novels were sort of autobiographical, and I was so fucking bored…And then I ran into screenplay work, and screenplay work forced me to get out of myself.” Price’s subsequent transformation into a social novelist, beginning with Clockers (1992), extends this modus operandi into a quasi-journalistic approach to the crumbling communities of New Jersey.‍

Mad Dog rests uneasily between Price’s ’80s and ’90s. Despite the fact that Price called the script “kind of like romantic horse shit” before it was set up, it is very clearly a personal project, not a commercial blueprint. Produced and protected by Scorsese, Price’s work was treated almost reverentially by cast and crew. McNaughton claims the cast, including Murray, vowed to not change a word “because [Price’s] dialogue is so carefully rendered.”

This is a screenwriter’s movie, but McNaughton, who still probably remains best known for his infamous X-rated debut, Henry: Portrait of a Serial Killer (1986), carefully and subtly stages each scene, from Wayne’s joyous dance to “Just A Gigolo” at a murder site to two almost painfully realistic sex scenes. McNaughton’s native Chicago is allowed to feel placid, dangerous, and even 3 a.m. magical, but always specific.

‍Mad Dog ultimately succeeds because it focuses on Wayne’s newly unearthed, yet long-simmering anxiety that, despite being a cop, he is not “brave and handsome.” Though surrounded by tough guys (especially Caruso), he’s shy, introverted, and less focused on catching criminals than the vulnerability his crime scene photography reveals in its victims. He’s not quite an artist trapped in a cop’s life, but a cop who wishes, vaguely and impotently, that he could be an artist, if he weren’t so thoroughly a civil servant. Frank, whose own particular shit is more nebulously handled (Glory basically says he’s sex negative at one point), thinks he’s doing Wayne a favor by sending him Glory, but he’s really just exacerbating the crisis. Despite Glory’s protests that she does not need saving, and the fine line she and Frank walk concerning the duties demanded of her, she is clearly his vassal, in hock for her brother’s debts.

Thurman, who was 23 when the film came out, goes toe-to-toe with De Niro and Murray, pulling off a performance that gets increasingly tricky. Glory (who does not come equipped with a last name) is a role that could have soured the film: she must be a fantasy to Wayne and an object to Frank without even suggesting a hint of either to the audience. Price provides the role with plenty of color and agency, but Thurman ends up performing an even more delicate balancing act than her co-stars. She’s the one who keeps Mad Dog from ossifying into a problematic period piece.

‍Mad Dog and Glory’s rich, complex humor and deeply emotive characters provide a viewing experience that may have been man bites dog in 1993 but is even more rare in the streamlined streamer-world of 2022.

Mad Dog and Glory can be rented or purchased from Amazon Prime, YouTube, Vudu, Apple TV, or Google Play.

Brendan C. Byrne writes prose and criticism for a variety of organs, including Filmmaker Magazine. Accelerate, a novella, appeared last year from Neotext.