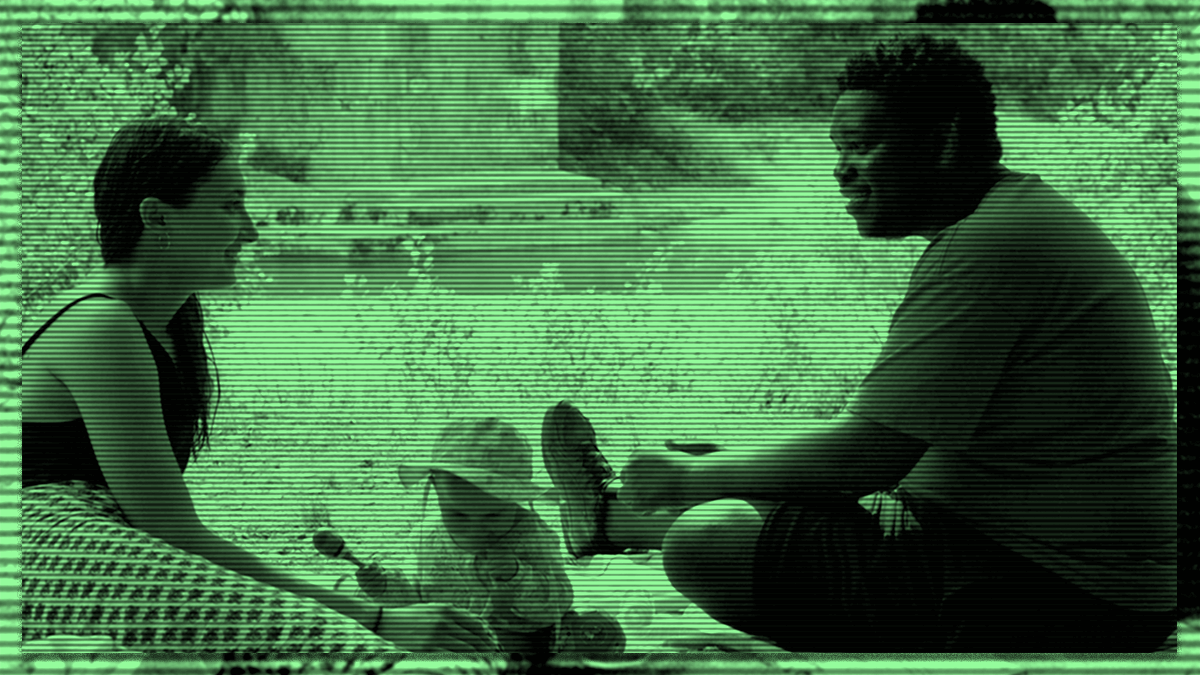 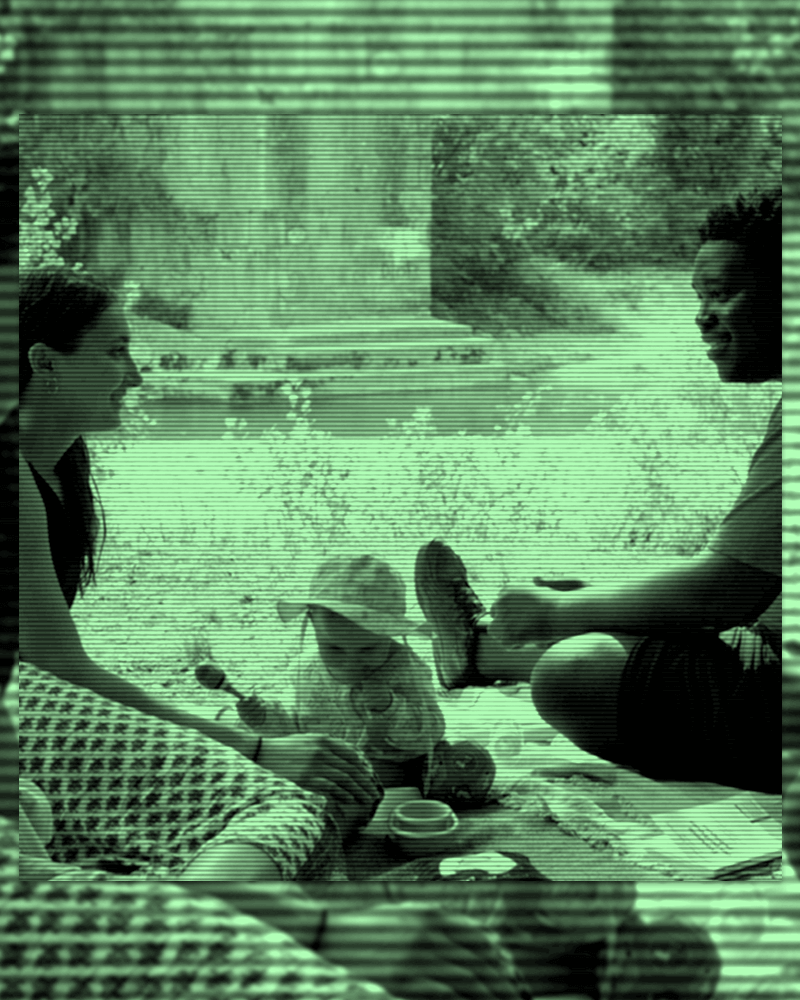 here’s a carefree physicality that tends to reveal itself when we step outside our comfort zones, especially in the summer. When traveling, for example, we may not be as intimidated by the idea of spending the afternoon on a white water rafting tour or walking upwards of 25,000 steps. We might even try our hand at a more extreme venture, like an ill-advised summer romance. In the world of Guillaume Brac, the youthful energy of a summertime holiday is infectious—complete with the tendency to risk it all for that rush of adrenaline, or that chance at love. Throughout All Hands on Deck (2020), Brac’s lighthearted comedy about a group of eager young men on an impromptu romantic sojourn to the south of France, characters jump for joy, stub their toes, trip and fall, crash their cars, and experience heartbreak from one scene to the next. It adds up to an exceedingly charming portrait of the effects of following your heart, from delightful to disastrous.

Brac is particularly interested in what it looks like to put outsiders outside their comfort zones, doubling down on the endless possibilities and inevitable malentendus such a situation can bring. In this case, he focuses on Félix (Eric Nantchouang) and Chérif (Salif Cissé), Black college students from the outskirts of Paris, whose summers were spent at local waterparks and basketball courts rather than beach resorts along the Mediterranean. In the film’s vivacious opening scene, a winsomely romantic Félix meets Alma (Asma Messaoudene) at a dance party on the Seine. The two spend the night in a Paris park, and when she leaves to go back to her family holiday in the South, Félix debates whether or not to surprise her there in person. Ultimately, with the encouragement of one of the elderly women he takes care of as an at-home nurse, he decides it’s worth the risk. This woman’s wise and tender words of enthusiasm seem to confirm the truism that we only regret the risks we don’t take, which propels Félix on his hero’s adventure.

Chérif not-so-subtly cons his boss at the grocery store into giving him a week off for his “grandmother’s funeral,” and the two trick an indignant, upper-crust Édouard (Édouard Sulpice) into giving them a lift via rideshare app. (“I expected two girls, Félicia et Chérifa,” Édouard says. “That’s us,” Félix replies.) Once the initial tension dissipates, however, the chemistry between the three young men slowly grows. After getting into a minor car accident, Édouard is forced to camp for a week with his passengers at their destination instead of carrying on toward his own family summer home and a planned bike trip. Here, Édouard is revealed not (just) as a member of the French bourgeoisie, but a genuinely kind, if endearingly awkward young man. “You’re a washout too,” Chérif says to Édouard as they reveal they both don’t have girlfriends, solidifying a brotherly bond early on in the film. As the three men stumble through this unfamiliar territory — Félix and Chérif in the south of France, Édouard on a buddy trip he didn’t ask to be on — you feel as though they’ve been plopped down into an Éric Rohmer film that doesn’t quite know what to do with them.

Brac wrote the script, along with Catherine Paillé, for students at the Conservatoire National Supérieur d’Art Dramatique, a French drama school. And while each of the actors’ winning performances are far from amateur, the fact that these players are outside the world of Hollywood gives the film a refreshing air of authenticity. Brac, who is white, worked with each actor to build out their characters and add truth to their stories, casting them based on these conversations instead of a formal casting call. And while he didn’t want a character’s race to be the subject of the film, as he tells an interviewer from AFI, he acknowledged that it couldn’t be erased completely. If you squint, you can see the French attitudes toward outsiders come through, and their hesitancy to let them fully into their rarefied world. ‍

All Hands on Deck is inspired as much by his actors’ stories as by Brac’s own childhood spent at a waterpark outside Paris, the subject of his 2018 documentary Treasure Island, as well as one of the vignettes in his 2017 narrative feature July Tales (also written for students at the Conservatoire). A respite for those who can’t afford to get away from the city during the summer, Brac lovingly captures this waterpark as a locale where grade-school children splash around in a manufactured “beach,” high-schoolers have their first summer flings, and families gather for picnics complete with singing and sport. With Treasure Island, Brac takes the Wiseman approach to the park, showing everyone from the middle schoolers who try to sneak in to the security guard who escaped political persecution in Guinea. Brac’s focus on realism bleeds into this fiction work, and his sensitivity for capturing moments of excitement, disappointment, and most masterfully, pleasure, is among the most impressive in contemporary filmmaking.

As the film wears on, Alma’s ambivalence toward Félix leaves him feeling confused and rejected, and his friends have to remind him to preserve his pride as he supplicates for her attention outside her house. And while Félix’s own Rohmerian journey is cut short, Chérif surprisingly finds himself in one of his own “Comédies and Proverbs,” befriending Héléna (Ana Blagojevic), a young mother whose husband had to leave the camp for a work emergency. Up until this point, Chérif, with his more reserved nature and slightly larger frame, has been rooted firmly in the “best friend” camp. Brac amusingly cites Judd Apatow as an influence, and you can see a bit of Knocked Up-era Seth Rogen in his character as he transforms from a grocery store clerk who watches basketball games on his phone in the break room to leading man on a romantic adventure.

In the most touching moment in the film, he takes a risk and asks Héléna to the karaoke “snack bar” in town, where Édouard, who’s come out of his shell as well, is holding court, drunkenly singing and dancing with the locals. She requests “Aline,” a slow ’60s torch song that the two sing together. You can feel Chérif in ecstasy just watching her, realizing how full of life she is and how much he wants her. It’s a moment of bliss, his own Green Ray (1986)—a little light at the end of the trip that was totally worth the risk.

All Hands On Deck is currently streaming on MUBI (or on Amazon Prime with a MUBI subscription).

Susannah Gruder is a Queens-based writer and critic with work in Reverse Shot, IndieWire, Hyperallergic and Screen Slate, among other publications.